Roger Svendsen keeps a log count of every cigarette butt he’s picked up for the past nine years in the Phalen/Round Lake area. He has a regular beat and walks around these lakes each day. His love of Lake Phalen and the natural areas in the park are a strong driving force behind his commitment to keeping this park clean.

One late May morning this spring, while I was out at Keller Creek near Round Lake helping classes during our restoration efforts, I spied Roger coming down the paved path. I decided to seize the moment and take some time to accompany him on his route to get a closer look at what has become Roger’s passion for almost a decade. As we proceeded on our walk, I asked him how he first got started on this mission.

He told me that he was discussing litter problems in the park with some park staff years ago and asked them if they picked up cigarette butts during their rounds. “We’re paid by the hour,” they told me. “There isn’t enough time in the day or money to do it.” This was the prompt that drew him into taking on this issue with full gusto.

As we walked along the path, Roger soon deviated from the sidewalk and headed down some brushy, overgrown trails to several stormwater outfalls and storm drains hidden back in the woods.

As Roger bent down with a stick to push a cigarette butt closer to him that was floating in the murky detritus near one of these drains, I realized that this was both a healthy obsession and a commitment with some physical demands.

“People have suggested that I get one of those trash grabbers so I don’t have to bend down to pick up the cigarettes, but I figured out that if I bend over to pick them up, I stay much more limber. “

At age 73, Roger has acquired a fair amount of notoriety for his role in cleaning up Lake Phalen. He’s been the subject of multiple local newspaper stories and videos. His take on his public image was summed up in this comment,

“My daughter once asked me, “How would you like being known as the daughter of the Cigarette Butt Guy?” I told her that I figure at my age, I don’t think it matters if I am crazy!”

As we continued our stroll around the park, I could tell that this daily walk has multiple benefits for both Roger and the community. Walking around the lakes each day provides him with the opportunity to be immersed in the beauty of the natural world and keep fit. But it also allows him to stay connected to a life tied to helping people with chemical addictions. Roger tells me he worked in the field of chemical addiction for many years before he retired.

The puzzle pieces were starting to fit together.

As we got closer to the “island” in Phalen Park, Roger relayed a rather troubling fact that on more than one occasion he has picked up as many as 2,000-3,000 cigarette butts on the island in one visit.

Hearing this has prompted me to contemplate some of the statistics and research I have been digging out about cigarette butt pollution since getting acquainted with Roger. Here are some facts I have learned; 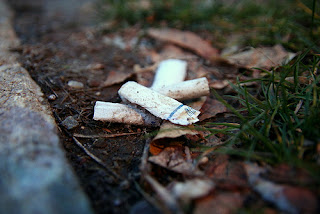 The Scoop on Cigarette Butt Litter

I decided to invite Roger to have a display at WaterFest this year about his stewardship efforts. He told me he stores the cigarette butts he has collected over the years along in boxes in his garage. When he showed up at WaterFest, he lugged the boxes he has accumulated full of cigarette butts up to the Pavilion and placed this shocking amount of litter at one of the entrances.

As visitors walked by, they experienced a rude awakening with the potent aroma of tobacco. It made quite an impact. His tally revealed he has picked up 481,929 butts in nine years. He told me his goal is half a million butts which means he’s close to reaching his goal. That’s quite a remarkable achievement.

We’d like to thank Roger for his awesome dedication to this cause! Imagine the impacts on our treasured lakes if he hadn’t taken on this mission!