Master Water Stewards, Bill Cranford, Rachel Hanks and Phyllis Webster are test driving the Adopt-a-Drain program in a targeted East St. Paul neighborhood as their capstone project this spring. The location they are focusing on is an area near Lake Phalen that Bill and Rachel live in called the Phalen Heights neighborhood, bordered by Maryland Avenue, Arcade Street and Phalen Lake Park in the Phalen Lake sub-watershed.

The Adopt-A-Drain program invites residents to “adopt” a drain by choosing one or more storm drains near their house and commit to clearing leaves and trash from it regularly. They receive a welcome packet once they sign up online and a sign to post in their yard that advertises the program. They are asked to report on their clean-up actions via postcard or email so their efforts can be documented. Residents can sign up online at adopt-a-drain.org. 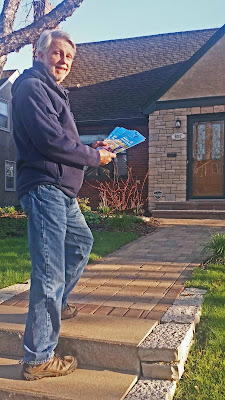 The Phalen team is encouraged by the responses they have already received since city posts on Facebook and door knockers were distributed in the neighborhood.

The response was immediate. By the next day, nine people had signed up to adopt drains in the targeted area. Other “adoptees” continue to pop up online. 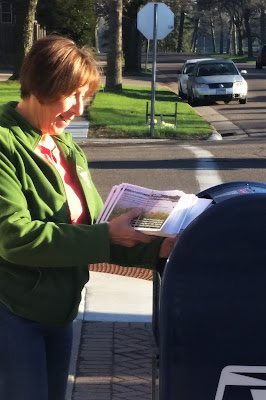 The team is also organizing two informational meetings at First Covenant Church, 1280 Arcade Street in St. Paul, on May 4 from 7-8 PM, to promote the program and provide information for the neighborhood and the general public about rain gardens, other BMPs and sustainable lawn care practices. They sent postcard invitations to the 735 residents in the area for these events.

Rachel reports that as of April 22, forty-one storm drains have by adopted by twenty-four households in their targeted area with 26 residents adopting 47 drains in other areas in our watershed since the city did their advertising push on Facebook in early April.

The map on the city of St. Paul’s website shows where drains have been adopted-to-date. The Center for Global and Environmental Education (CGEE) at Hamline University has been working with Watershed Partners for several years to develop the Adopt-a-Drain program to provide a collaborative platform for water-focused organizations in order to engage citizens in preventing run-off pollution and to measure the impact of their actions. The program has been piloted in a number of neighborhoods in St. Paul, including the Como Lake area and is expanding to the Lake McCarrons neighborhood in Roseville this spring. The program has also been piloted in Minneapolis, where it is growing there as well.

Nearly six hundred residents in St. Paul have signed up to be a part of this initiative to reduce pollution from going into the Mississippi River and local lakes in the first year and a half. The role of CGEE at Hamline University is to do the overall administering of the program, customizing and sending out packets in the mail to people who sign up online, updating the database, answering emails sent to Adopt-a-Drain, sending reminder emails to participants twice a year, keeping records and being responsible for program reporting and evaluation.

This powerhouse team of Master Water Stewards in our watershed are not novices in the realm of community organizing.

We look forward to witnessing the results of their stewardship actions in the coming years!

We applaud the City of St. Paul for promoting stewardship that protects Lake Phalen and the Mississippi River as the Adopt-A-Drain program continues to build momentum. Thank you, Stewards, for your creativity and determination!