The last public tour the Watershed District co-hosted in the preserve with the city of Woodbury was in 2013. Thanks to the encouragement and work of Tamarack Nature Preserve advocates, Dana Boyle and Stephanie Wang, the wheels began to turn again this spring to host another tour for the public in mid-summer to raise interest and appreciation for this “crown jewel” of wetlands.

“We are working on a broad community engagement plan to help residents learn about opportunities throughout the year to tour the Preserve, help with trail management (buckthorn and burdock removal and trash cleanups) and become better educated about this amazing treasure in our own backyard,” announced Dana and Stephanie who live in neighborhoods adjacent to the preserve.

Last year Dana created an online field guide that highlights the diverse plant life abounding in the Preserve. Click here for the guide.

This summer, Dana and her colleagues created a crowd-sourced “project” for the Tamarack Nature Preserve on the iNaturalist app to complete their capstone requirements for the Master Naturalist program. This interactive field guide is for people of all ages and interest levels to gain an appreciation for nature, specifically this Minnesota wetland, and to collaborate in order to become part of a community of friends of the Preserve.

The guide currently features plants that are found in the fen (a bog trail) and on its perimeter (a woodland trail). It will also include birds, mammals, reptiles, amphibians and insects. Anyone who visits the area is invited to add their observations to this project. Over time they will have a record of phenology and see when and where these observations are most likely to be found. Here is a link.

In preparation for the summer tour, Dana and Stephanie organized a reconnaissance walk in May with Woodbury Assistant Park Supervisors, Amy Howard and Kevin Burshten and Woodbury’s Environmental Resources Specialist Kristin Seaman to look for long and short-term solutions that would address trail issues in the park.

A reoccurring challenge in the preserve is a stretch of the path on the north side of the preserve that becomes very muddy and impassable in the spring and summer. They were also scouting for locations where invasive species could be removed by volunteers.

As a short term solution Woodbury park staff built a temporary boardwalk over the areas that typically flood so that the upcoming tour participants and others using the park could pass on the north side of the trail between the two main boardwalks.

Both Dana and Stephanie have also organized several ad hoc invasive plant removal activities and are planning an educational event in August with a Woodbury Pack 60 Webelos Cub Scout Den who will be cutting back burdock on the north stretch of the trail between the boardwalks and touring the preserve.

Stephanie wanted to learn more about the history of the preserve so she approached Steve Kernik, a retired environmental planner for the City of Woodbury who provided this historical background about the area.

“The Tamarack Swamp used to be an unbroken system starting at the back of City Hall and flowing downhill all the way to Battle Creek Lake. Over the years it got severed by Valley Creek Road, Bielenberg Drive, I-494 and Weir Drive. Valley Creek Road impacted the upper part of the swamp behind City Hall because the culverts under the road were set too high, which resulted in permanent high water that changed the character to a normal swamp.

About ten years ago a lift station was installed (mainly for stormwater management purposes) which keeps the fluctuations down, but the damage is done. From Valley Creek Road to Bielenberg Drive the swamp is fairly flat, dropping only a few feet. West of Bielenberg Drive it drops quite quickly, about 30 feet from Bielenberg to I-494. So the swamp west of Bielenberg is somewhat drier than the east side just because of topography.”

Studies Completed in the Preserve

“There have been a number of studies done on the swamp, some of them dating back to the late 1970’s or early 1980’s. The really early ones aren’t very detailed but the last one (or ones), done by the Ramsey-Washington Metro Watershed District are the most valuable. A detailed study of the vegetation of the swamp was done in 1999 that includes a map that shows the major ecosystems that are present.”

Kernik continued his recollections. “One of the interesting findings of that study was that all of the tamarack trees in the swamp are about the same age. They all got their start during the drought years of the 1930’s. The assumption is that conditions were good for the tamaracks to germinate at that time, and as water started to rise in subsequent years, the trees were able to grow new roots just at the water line, which allowed the trees to survive in the deeper water. The problem is that young tamaracks can’t germinate in the high water conditions.

The other factor affecting the Tamarack Swamp is water quality. Tamaracks and the associated ecosystem usually exist in very low nutrient waters. It’s not that they can’t handle higher nutrient loads, it’s just that other plants begin to outcompete them when nutrient levels rise. So this has affected the presence of other species moving in to the swamp.”

To decrease stormwater runoff impacts the Watershed District installed two treatments systems in 1999 to capture sediment and contaminants entering the wetland. In 2003 the District designed a series of swales and basins, located along Valley Creek Road in Woodbury to treat stormwater before it enters the Preserve.

As summer approached, efforts to publicize the summer tour escalated. To initially get the word out about the tour and raise interest in the Preserve, Dana had a table at WaterFest. Many people stopped by as she worked on a painting of one of flowering plants that grace the boardwalk in the summer – the marsh cinquefoil.

The tour was advertised broadly through many different organizations, social media networks, the city’s email lists and with posters in key gathering points near the Preserve (Caribou, YMCA and library), and along the trail access points. By mid-July, 150 people had reserved a spot on the tour and phone calls were still coming in right until the end! Clearly, interest in learning about this gem in our watershed is strong!

On the day of the tour, a thunderstorm threatened to cancel the event. But by six o’clock the weather had settled down and a group of eighty-five people in a range of ages showed up, from seniors to families with younger children from the surrounding neighborhood to Master Naturalists-in-training who were drawn from across the metro area to come to learn from Jason Husveth, plant ecologist of Critical Connections and his team of experts.

For nearly two hours Jason captivated tour participants with his explanations of the ecological and geological changes on the land, impacts of development on the water flow and all sorts of fascinating details about the diverse array of plants that inhabit this unique preserve. Meanwhile, in other areas of the park, two other tour groups, including an “express” version for parents with younger kids and for those who wanted a shorter tour. A second plant ecologist, Doug Mensing, kept participants engaged and inquisitive about the unique characteristics of the preserve and its diverse plants. 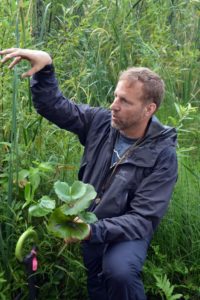 These are great ingredients for continuing to expand Woodbury’s engagement and protection of this valuable resource – people who are curious and excited about learning, a parks department that is responsive, and the kind of teamwork that lends a vibrant approach to crafting more opportunities for the community to appreciate the complex beauty and intricacies of nature “in the city”.