The Phalen Chain of Lakes: Groundbreaking carp research and effective management through a partnership with the University of Minnesota 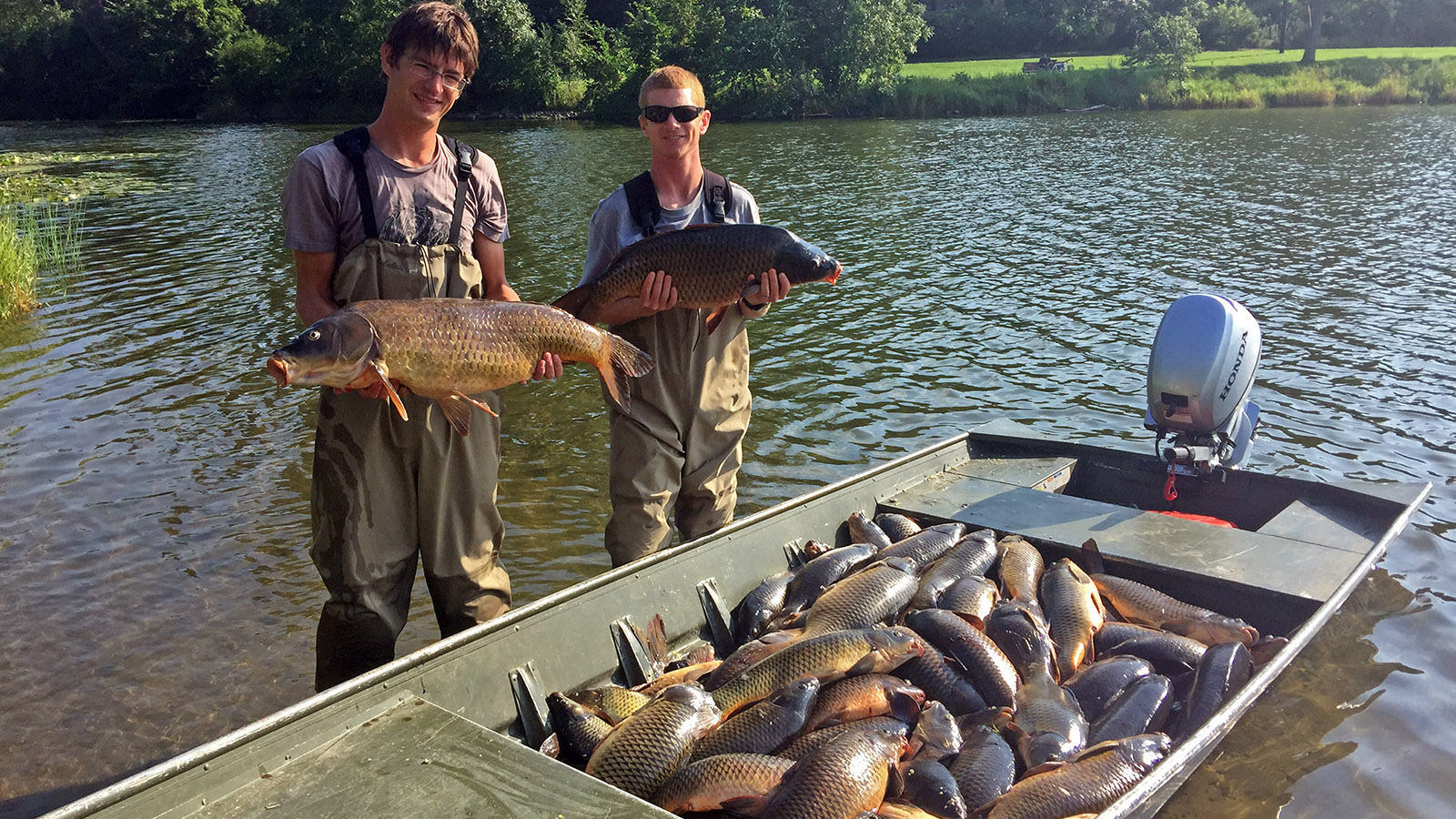 The common carp is an extremely invasive fish species from Eurasia. Due to its ability to overpopulate waters and its bottom feeding behavior, it’s considered one of the world’s most pervasive and damaging species. Carp root around on the lake bottom stirring up sediments, dislodging beneficial aquatic plants, and releasing nutrients into the water column that can produce algal blooms. Especially in shallow lakes, carp can severely impact water quality.
In the mid-2000s, numerous field observations from District staff suggested a very robust carp population in the Phalen Chain. At that time, carp management was in its infancy. In 2009, we approached the U of MN Carp Research Lab with the idea of partnering on a large-scale applied carp research project on the Phalen Chain. Grant funding was secured, and novel research was conducted that fundamentally shaped carp management in the United States and abroad. Ten peer reviewed journal articles and five Masters Theses were generated from this partnership.
The research in now completed and we have shifted to long-term carp management in the Phalen Chain and connected ponds and wetlands.

Research findings strongly supported a two-pronged management approach: 1) reduce the adult carp population in the main chain of lakes, and 2) stop carp spawning in connected ponds and wetlands. Studies in the Phalen Chain found that carp spawn in the main lakes, however, bluegill sunfish consume a large majority of the eggs. This predation essentially blocks successful reproduction in the main lakes. Another key finding was that successful carp reproduction happens in shallow connected ponds and wetlands. Adults move from the main lakes in the spring to these key spawning areas that lack bluegill sunfish. Successful reproduction takes place, and hoards of young carp eventually migrate to the main lakes.
To determine the carp population and to track schools, we used a mix of boat electro-fishing, mark-recapture (fin clipping), and implanting radio-tags in a sample of carp. Initial surveys found that the main Chain of Lakes had carp biomass levels well over 100 pounds/acre, the threshold where water quality impacts are generally evident. This supported field observations by Watershed ecologists.
To capture adult carp, we used large sein nets under the ice and baited box nets in the summer along the shore in Kohlman, Gervais, and Keller Lakes. Both of these methods were effective in capturing thousands of carp.
Kohlman basin, Markham Pond, and Casey Lake were identified as key spawning areas for carp in the Phalen Chain. Carp were eliminated in these systems and bluegill sunfish were introduced to act as a natural means to limit carp re-introduction. Aeration systems were installed in Casey Lake and Markham pond to sustain the bluegill through the winter months.
PVC pipe barriers were installed in key locations to limit carp movement into spawning areas during the spring. These barriers are monitored on a daily basis. If carp aggregate around the barriers, Watershed staff use a variety of methods to net and remove these fish. We have found that these barriers are an effective tool in preventing spawning migrations, while also providing an opportunity for efficient carp capture.
We will continue to actively manage carp in the Phalen Chain of Lakes. We are monitoring the adult population in the main lakes on a set schedule. In addition, we are conducting fish surveys in the connected spawning areas so that we can detect and address any new carp introductions. We are also maintaining and closely monitoring the carp barriers, and netting carp when feasible. -Continue to monitor the carp population to assess management effectiveness

In Lakes Kohlman, Gervais, and Keller the carp population has significantly declined by over 70% as a result of the management activities. In 2013, carp biomass dropped below the 100 pound/acre threshold where adverse water quality impacts can take place (see chart below). In addition, we have not detected any substantial quantities of young carp in the main lakes, suggesting that carp spawning in connected ponds and wetlands has been limited by the intensive management of these systems and the barrier installation. We are in the process of compiling a report that summarizes water quality trends in the Phalen Chain over the last ten years. In shallow systems, improvements in water quality may be linked to a reduction in carp densities. More information will be available in the coming years – please stay tuned. As interest in management of common carp populations grows, so does Carp Solutions (Star Tribune)

Carp Talk – Keeping Tabs on Carp in the Phalen Chain