After city meetings with local railroad authorities over the past two years, a formal Environmental Review, a public input process and significant local opposition, a decision has been reached in favor of the railroad.

The City of St. Paul has conceded that Canadian Pacific Railway has the authority to bypass their request for an Environmental Impact Statement (EIS) and go forward with plans to fill in six acres of wetland along Pigs Eye Lake and remove about four wooded acres in order to expand its switching yard (Dunn Yard). The plan also will add an 880-foot retaining wall made of steel sheeting, ranging in height from 5½ to nearly 11 feet. Pilings to support the wall would be 23 to 43 feet deep.

The city had requested an environmental impact statement after reviewing a shorter Environmental Assessment that the railroad submitted in June, but federal jurisdiction over the project trumped this request and the railroad is moving forward without it.

To improve the efficiency of its operations, Canadian Pacific (CP) intends to lengthen six existing tracks by expanding them from 7,000 to 10,000 feet to accommodate modern train lengths. They will also be building a new access road adjacent to the extended tracks. CP operates 34 trains per day through St. Paul and half of those stop at Dunn Yard. Freight trains lengths have grown in recent years. The current tracks cannot handle the longer trains and have to be split into shorter sections using a rail hump which results in delays, noisy cars and more use of locomotive and fossil fuels.

Local Agencies and Neighbors Speak Up But Are They Heard?

Comments from agencies and individuals about the proposed project were collected during a 30 day public review and comment process this spring. A public input meeting was held on April 23 at Battle Creek Recreation Center that drew a list of concerns from multiple entities.

Both the Minnesota DNR and the city contend that the railroad’s plan conflicts with St. Paul’s Great River Passage master plan, an effort to develop 17 miles of Mississippi riverfront that’s been years in the making. Pigs Eye, the largest “lake” in St. Paul, now is almost inaccessible to the public except by boat. The city envisions linked trails in the regional park surrounding the lake, as well as fishing and paddling access. The railroad’s plan “almost certainly will result in both large cost increases and technical challenges” to achieving that vision,” says the DNR. The railroad has said they would will try to work with the city to try to create suitable access points to the lake.

Residents who live across the street from the railroad yard also raised issues about excessive diesel fumes and the sound of screeching brakes, idling engines and rail cars slamming together in Dunn Yard.

St. Paul’s Order for an Environmental Impact Statement Trumped by the Feds

The railroad appealed the City’s decision to order an Environmental Impact Statement (EIS) to the Federal Surface Transportation Board (STB), seeking a declaration that state and local permitting are preempted by federal law. In October, after obtaining legal consultation, the City had to concede that they cannot impose environmental review, wetland, or zoning approval requirements on CP. CP is also exempt from complying with Ramsey-Washington Metro Watershed District’s permitting requirements.

Canadian Pacific Railroad is still awaiting the Army Corp of Engineer permits for Phase 1 and Phase 2 of its project. According to federal law they are required to replace any filled in wetlands at a 2 to one ratio. The railroad is planning to purchase credits from the wetland bank to make up for the impacts expected in the project, rather than creating or restoring wetlands in the area. CP Rail met with Wetland Conservation Act (WCA) officials multiple times to find locations within St. Paul and RWMWD to mitigate the wetland impacts. No suitable areas were identified for mitigation.

They have obtained a National Pollutant Discharge and Elimination System (NPDES) permit from the Minnesota Pollution Control Agency to regulate stormwater discharge during construction activity. The NPDES permit is a federal permit but is administered at the state level.

MPCA staff will inspect the erosion and sediment control measures and stormwater BMPs (Best Management Practices) during construction. CP is still planning to construct an underground infiltration trench for stormwater management but the Watershed District will not have jurisdiction to be onsite to inspect during or post construction.

Not Just a Local Issue

This recent issue of control over what happens to a wetland in our Watershed District, like other related projects around the country has been precipitated by the increased use of rail lines, especially for the transport of oil and coal. It raises serious questions about local decision-makers’ ability to provide input and have a say over what happens in our communities.

To hear the perspective of several community leaders on this issue and the challenges they face in seeking local control, check out the Lillie News article by Patrick Larkin in the Maplewood Review on September 29th. It includes comments from District 5 coordinator, Betsy Leach, local city council president Kathy Lantry and her aide, Ellen Biales. The article also mentions Governor Dayton’s recent press release urging the federal government to adopt stronger railway safety standards to improve safety for oil shipments passing through the state via railroads coming from North Dakota.

Stay tuned. It’s definitely going to be a “long haul” working out these kinds of issues. 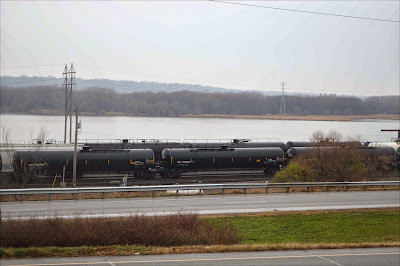