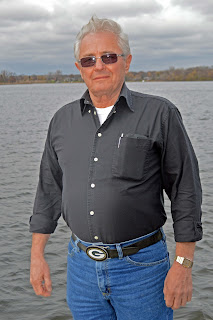 On November 12 at the District’s dinner ceremony, RWMWD recognized Roger Fox with a Watershed Excellence “Lake Steward” Award. This award recognizes an individual or organization that enthusiastically engages in lake neighborhood communication and watershed education in their local community.

I first encountered Roger Fox at an education event at Shoreview Community Center a few years ago that Maddy Jackson, a high school senior, organized to familiarize her community about aquatic vegetation in Snail Lake and its water quality issues. I spent some time talking to Roger, a videographer/photographer and volunteer water quality monitor, another resident on the lake. I was inspired by his dedication and long-time interest in water.

Maddy’s event drew over fifty people, many of them residents on Snail Lake. I was impressed with this friendly, enthusiastic group of people that showed up to learn about water issues and support the efforts of this young steward. It was my first opportunity to witness the level of community and environmental passion that people like Roger and Maddy share about Snail Lake.

When a call went out last summer to the RWMWD’s Citizen Advisory Commission for Watershed Excellence Awards nominations, Kathryn Keefer, a resident on Snail Lake and Shoreview representative, jumped at the chance to nominate him.

One of Roger’s many contributions has been his twenty-five years of service in monitoring water clarity of Snail Lake for the Pollution Control Agency’s Citizen Lake and Stream Monitoring Program.

“Beyond this long-term attention to the clarity of Snail Lake, Roger has advanced the unity of the Snail Lake neighborhood and the various issues of lake level by keeping the residents informed through emails and providing a continuous, updated list of the residents. He provides photographs and videos of neighborhood events, lake activity, waterfowl and issues relating to high water challenges – such as floating bogs.”

“Roger’s concern about the lake quality, the characteristics of the private and public land surrounding the lake and his diligent attention to keeping the neighborhood informed is worthy of recognition by RWMWD. Roger also drew their attention to various issues regarding natural resources’ impact on the neighborhood health and safety including those relating to road improvement, future park (county) issues and the very recent removal of bog materials which resulted in a contract between the neighborhood, the city and county. Roger’s communication support was most helpful throughout these challenges.”

Roger has a special talent for conveying the beauty and significance of Snail Lake to his community through his photography. Here are several other photos he shared with the Watershed District:

In 2004 Roger attributed credit to his monitoring partner, his dog named Binky, a Yorkie who for many years accompanied him when he monitored Snail Lake.

Roger’s story was recently reprinted in the Minnesota Pollution Control Agency’s newsletter, Reflections 2014: A Yearbook of the Citizen Lake and Stream Monitoring Program, when Roger was honored for his twenty-five years of volunteer service. The PCA acknowledged his dedication to water quality and commitment to healthy lakes.
Binky and the Lake Monster
by Roger Fox

I moved to Snail Lake in Shoreview during the summer of 1973. I was thoroughly enjoying it until one evening about 1985, I was outside when a Ramsey County Policeman stopped to inform me that someone had reported some kind of “monster” in the lake earlier that day and it was his duty to inform everyone that lived on the lake about this event. He was very embarrassed to even have to explain it to me and we joked about it a little and then he went on his way and I forgot all about it. But then, I joined the CLMP (Citizen Lake Monitoring Program) in 1990 and began taking secchi disk readings at two locations on the lake. By this time, we had a Yorkie in the family named Binky who loved to go with me in the canoe when I took my readings. She would bark and bark at something in the water that I could never see. Fish maybe or just the waves?

One day, two people in a boat next to us asked what she was barking at and I replied “it must be the lake monsters”. The idea kind of stuck with us after that, so that when I told the story to our program coordinator at the time, Jennifer Klang, she liked it so much that when our next award was handed out, she made certain that Binky received one too. By that time, Binky the Wonder Dog, as she was then known, was on her last legs and when I took her to the Vet and it was decided to give her “the shot”, it was really a sad day in our household. When I got home again, I noticed the day’s mail where I had dropped it during the excitement of getting her to the Vet. I opened the large manila envelope and there was Binky’s award. I wish she could have lived another day so that she could have seen it.