The stocking of bluegills at Casey Lake has been a long-awaited moment. Each year the Minnesota Department of Natural Resources (DNR) stocks fish in lakes around the metro and out-state areas. They stock 40,000 bluegill sunfish a year! They released about 300 two-year-old fish (20 pounds total) at Casey Lake on May 10.

One of Minnesota’s favorite fish species, the bluegill sunfish, will be a welcome addition to Casey Lake. This native species will be fun to observe along the shore, a feisty fighter with hook and line, and a ferocious carp egg consumer. The latter quality will not only help Casey Lake, but will keep this system from becoming a carp nursery, which benefits the Phalen Chain of Lakes. How so? Well, University of Minnesota research has shown that juvenile carp can become overabundant and move from small storm water ponds, like Casey, into larger lake systems, like Kohlman, Gervais, and Lake Phalen. A key to controlling carp in larger lake systems is to stop reproduction in smaller connecting ponds and wetlands. Sunfish are sensitive to low dissolved oxygen levels, especially in the winter, so an aeration system will be installed by the City of North St. Paul, the Watershed, and the MN DNR.  The goal is to have a sustainable sunfish population, which will provide an important neighborhood fishery, and at the same time, protect the Phalen Chain of Lakes from the invasive common carp. 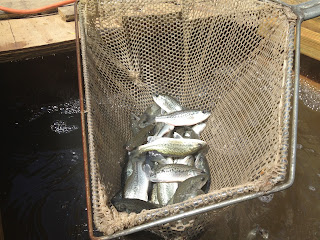