By Sage Passi and Paige Ahlborg

﻿The curb-cut rain garden project in the neighborhood near Casey Lake in North St. Paul and Maplewood is nearly finished except for a few finishing touches. Thirteen out of the fourteen residential rain gardens intended to be built were constructed and planted this fall with funding from the Clean Water Fund. We’re ready to celebrate! Each of the rain gardens was designed to capture street run-off before it drains into nearby storm sewers and downstream. We are happy with the results and look forward to watching how these gardens perform and flourish in coming years.

What does it take to get 14 curb-cut rain gardens installed in a neighborhood?

In 2011 the Watershed District began looking for a location to test-drive the process of engaging property-owners in a project to install a group of rain gardens in a priority watershed. We wanted to identify optimal retrofit locations where we could install curb cut bioretention basins in a residential neighborhood to get a good return on our investment in terms of phosphorus removal and a reduction of run-off volume and total suspended solids going into a downstream impaired lake.

Why did we pick this area?

We knew from anecdotal evidence that the people who live in this neighborhood place a high value on the lake in their neighborhood. Casey Lake has local and regional significance. It is an important local water resource surrounded by 140 acres of medium density residential land use and 33 acres of Casey Lake Park.

We anticipated that there could be a threshold of residents who would act as stewards and sign up for a rain garden if asked. The Casey Lake neighborhood is located upstream of an impaired subwatershed. Casey Lake drains into Kohlman Creek that flows into Kohlman Lake, a downstream lake that is impaired for phosphorus that met the criteria for water quality improvement projects that had the potential to draw on Clean Water Funds from the state.

What was the first step in the process?

How were potential sites chosen? 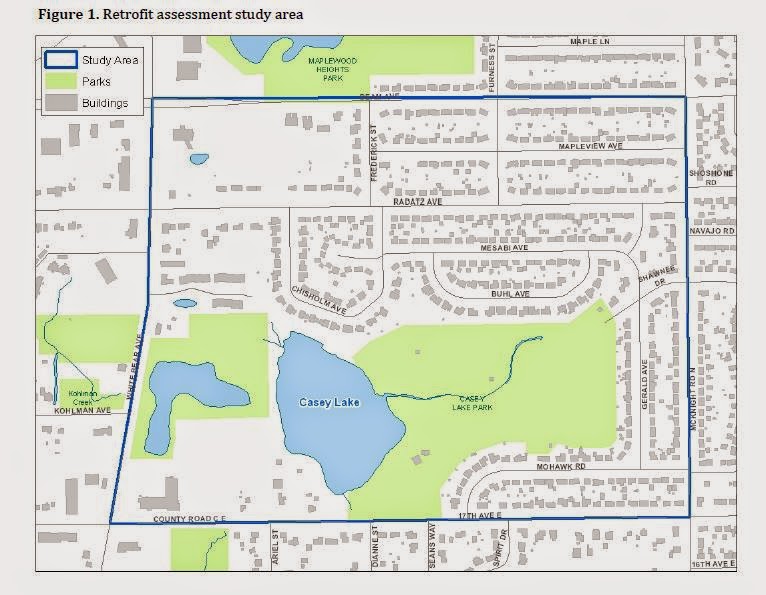 Through information gathered during that study, forty- five candidate sites in the Casey Lake neighborhood were selected based on 1) size of drainage area, 2) presence of tree cover and utilities, 3) space to install a rain garden, 4) and ability to intercept street stormwater runoff before reaching a catch basin.  Selected sites were then overlaid in GIS with Ramsey County Soils data to determine which sites were in areas with soils expected to infiltrate well. A rapid site specific performance analysis was completed to determine which of the 45 locations returned the highest value on investment. Rain gardens were ranked from highest to lowest TP removal rate over a 20 year term cost to determine prioritization of installation.

In 2012 an initial inquiry letter was sent to gauge the interest level of homeowners at these 45 sites. Five people responded favorably to having a rain garden installed in their yard and over the next year we continued to make further contacts through door knocking, phone calls and additional mailings to increase participation.

In 2013, the City of North St. Paul worked with the U of MN Resilient Communities Project to partner with students on a range of sustainable initiatives. During this time, a graduate student at the U of MN, Mary Hammes, worked with the City to assess the community’s capacity to get involved with clean water issues. She interviewed residents on a variety of topics related to the Kohlman Creek Subwatershed to gain perspective on the community’s identity, willingness to engage, and their barriers to doing so. Interest and support for watershed and neighborhood-friendly practices relating to the Casey Lake neighborhood appeared to be growing.

Through the partnered outreach efforts we eventually had about twenty households who had a high level of interest in being involved in the project. A proposal was submitted to the state for Clean Water grant funds to implement the project in 2013 but ours was not chosen in that round. The Watershed District reapplied for funds for the project in 2014 and we made it through the gate! In early 2014 the Watershed District was awarded $200,000 in Clean Water Funds with additional matching funds from the District’s Best Management Incentive Program for the Casey Lake Neighborhood Stormwater Retrofit Project.  We were on our way!

Moving from Design to Construction…..Details…Details

In early 2014 preliminary designs for the homeowner rain gardens were developed by Ramsey Conservation District and initial planting plans were created and presented to homeowners for their approval. Homeowners were invited to meet on March 25 with District staff, Matt Kumka, landscape architect from Barr, Ramsey and Washington Conservation District staff and six Ramsey County Master Gardeners to further refine the planting designs for their gardens. Site visits further refined the construction plans with the identification of utility issues and other constraints on the site.
The project was put out to bid in early summer and construction began in late August and continued into September and October. Chuck Hanna (Outdoor Lab) was chosen as the contractor. Kudos to Chuck and his crew for their hard work, creativity and problem-solving in this project!

Homeowners and Volunteer Involvement – Many Hands Working Together

A day of planting with homeowners was organized on September 20, with watershed staff, twelve Ramsey County Master Gardeners and several other community volunteers assisting homeowners in the planting of their rain gardens.

We had a beautiful day for this planting marathon and an experienced cadre of Master Gardeners who had been waiting in the wings to help ever since the project was first announced in the spring. We paired homeowners with two to three assistants and everyone set to work planting their respective gardens.

Here’s an e-mail comment I received from Monica Wierzba after her garden was finished.

“I just wanted to thank you and the Watershed District for having the Rain Garden installed in our yard. I know it will be amazing once it’s up and growing! One more thing. I would love to send the two gals a thank you card for helping me plant the garden. Can you please send me their addresses?”

Six gardens were completed on September 20 and after a week of rain and various construction delays, the rest of the rain gardens were planted with help from additional Master Gardeners, other volunteers, Washington Conservation District staff and Watershed District staff and interns during the week of October 6. It takes a village!!!


Dominic Cincotta, a resident who lives on Mesabi Avenue in North St. Paul and one of the homeowners in the project, summed up the efforts when his garden was completed by saying,
﻿

“I really enjoyed working with the folks who helped us on our rain garden. I think this project is really going to clean up the stormwater coming down the streets. There’s a lot of water that runs down this street when it rains. Thank you to everyone involved in making this project successful! We are looking forward to seeing the outcomes this spring.”