When our Water Quality Team, Dave and Eric, recently disappeared from the office for ten days, I knew they were up to something. I didn’t think this current disappearing act was because they were inching their way through the seven miles of underground pipe in the Beltline Storm Interceptor from the Mississippi River to Lake Phalen again like they did last winter. (To learn more about that adventure, read “Fifteen Days Underground”.)

I knew something was up and wondered what could it be this time? I was determined to get to the bottom of their latest disappearance.

A little investigation and a phone call to Dave led me to an answer.

It was alum pond cleaning time.

Dave and Eric were on a mission for Tanners Lake.

That raised even more questions for me. How do you actually clean a pond? Why would you even think of cleaning a pond?

So, after learning their whereabouts from Dave, I drove cautiously to the unobtrusive building which had been Eric and Dave’s “hideout” for the past ten days. I wondered what I would find there.

I noticed there was a small barbeque grill sitting by the door and was glad to know they were still getting nourishment. Despite their remote location, and given Eric’s gourmet talents, my hunch was they were probably eating better than the rest of us back at the office.

The alum treatment facility has a big job protecting the water going to Tanners Lake. The lake is primarily used for recreation including swimming, skiing, boating, fishing, canoeing and picnicking. It discharges into Battle Creek Lake in Woodbury, which serves as the headwaters for Battle Creek, a tributary of the Mississippi River.

Protecting this lake only makes sense.

In 1997, the District set water quality goals for Tanners Lake to support swimming and other recreational uses. Since then, the RWMWD completed several capital improvement projects (CIPs) which contributed to significant improvements in water quality. These improvements have resulted in Tanners Lake being removed from the Minnesota Pollution Control Agency (MPCA) Impaired Waters List for excess nutrients (phosphorus).

One of the District’s water quality projects was the construction of a set of permeable weirs in a wetland north of the lake to slow the water down as it moves through the area so the sediments have more time to settle before they enter into the lake.

RWMWD began operating the alum treatment facility in 1998. The process of adding aluminum sulfate, otherwise known as alum, to stormwater is called alum injection. Once the alum gets into the water it binds the available phosphorus which creates the floc. This causes the fine particles to coalesce, clump (or flocculate) into larger particles. Alum injection can help meet downstream pollutant concentration loads by reducing concentrations of fine particles and soluble phosphorus. 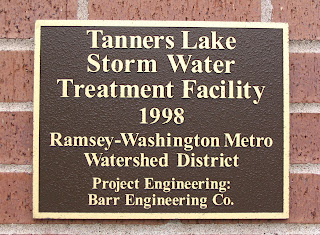 Alum treatment systems generally consist of three parts, a flow-weighted dosing system that fits inside a storm sewer manhole, remotely located storage tanks that provide alum to the doser, and a downstream pond that allows the alum, pollutants and sediments to settle out.

When alum is injected into stormwater, it forms floc, which become heavy and precipitates out. These precipitates combine with heavy metals and phosphorus and sink into the sediment in a stable, inactive state. The collected mass of alum precipitates, pollutants and sediments is commonly referred to as floc.

The building at Tanners Lake Alum Treatment Pond was constructed to house the alum injection equipment. The settling pond was created to retain the floc. This gives the alum time to react with the phosphorus. Once the majority of the phosphorus is removed, the water leaves the alum pond through a weir, and then is directed through a pipe that runs under Century Avenue. From there it is routed to a small wetland complex in Horseshoe Park in Oakdale and then enters Tanner’s Lake. This successful project currently removes 70 percent of all phosphorus entering the facility in a typical hydrologic year.

What did Eric and Dave actually do at the facility between 4 AM and 6 PM or later?

Shortly after my arrival, Eric Korte, the District’s Water Quality Monitoring Coordinator, drove up and climbed down to the pond to begin his tasks in this around-the-clock operation.

I took a step toward the mucky perimeter of the pond and decided not to go any further. The slope was slippery and I wasn’t wearing my waders.

E
Eric’s job for four to seven hours each day during this ten-day operation was to drive the boat around the pond stirring up the floc to suspend it in the water. Why? Over time the floc in the pond builds up and needs to be cleaned out. For the fall cleanout, the Watershed District was granted a permit from Metropolitan Council Environmental Services to pump the alum floc out of the pond into a nearby sanitary sewer.

I watched as Eric gunned the outboard motor repeatedly as he moved back and forth across the pond.

“Eric’s method for mixing the water in the pond with the boat really worked well to re-suspend the floc. Within minutes after Eric stopped mixing with the boat we saw the floc settling out and the clear water emerging on the water surface. We were tuned into hearing the thickness of the floc as he passed.”

In the middle of the pond I saw three huge bobber-like contraptions bouncing on the surface. I asked Dave what was their purpose and what was going on below the surface of the water.

“Eric and I installed a GridBee AP4000 air-powered mixer, which is an underwater bubbler in the alum pond to help re-suspend the floc in the water column to help it be more “pumpable.”

To get an idea what the AP4000 set up looks like see diagram above. Picture a 55-gallon drum sitting on a plate with air diffusers on the bottom and then an air hose attached to the plate that helps circulate the floc.

Once the blower pumps are turned on; bubbles are forced up the drum, which creates suction at the base of that drum that draws in the surrounding floc. The pumped air forces the floc out the top of the barrel and the cycle continues. The longer the AP4000 stays on, the better job it does of suspending the floc and the larger the plume of floc that can be pumped into the sanitary sewer system.

Why did Dave and Eric decide to modify and take over the clean-out operation?

“We had the opportunity to re-purpose a couple existing pumps that were no longer in use at the PCU Pond. That got us to thinking about improvements and ways to reduce the cost of cleaning out the floc at our Alum Pond. It’s expensive and has to be done every three to five years. We thought we could make some changes and save money for the district. It was costing about $30,000 each time it was cleaned up so we decided to try it ourselves,” said Dave.

“With our improved process, some additional equipment during this first year and doing it ourselves rather than hiring a contractor, we were still able to save about $10,000 including staff time. This savings will continue to grow because we will be depreciating the expenses we have incurred over time.”

I asked Dave if he ever got bored during this operation?

“No. You are always doing something, even if you are waiting to do your next reading. There’s always something to else to do or pay attention to.”

What tasks are involved in the alum pond clean-up?

“We have to collect grab samples that are representative of that day’s discharge. Each series of four grab samples are composited into one daily sample that is analyzed back in a lab for pH, chemical oxygen demand, total suspended solids (TSS), total phosphorous, nitrates, chlorides, mercury and a series of metals. The samples are picked up daily at the site by the Met Council.”

“
“We also collect our own samples that we send to a lab for analysis. One of those samples collected each week is analyzed for PAH’s (polycyclic aromatic hydrocarbons) diesel range organics/gasoline range organics.”

“We monitor the pH of the water. We keep track of the amount of water being pumped into the sanitary system by using a flow meter which displays the number of gallons of water pumped and its rate of flow.”


During the clean-out Dave took regular readings of the number of gallons of sludge water being redirected to the sanitary sewer system during the permit period.

“We had a permit to discharge 1,200,000 gallons during our permit period so we had to monitor this carefully to stay within our discharge limit. We also had to make sure our pumps were operating properly and didn’t get clogged.”

During normal operations at the alum treatment plant, there is a direct relationship between the water flow through the system and alum dosage/treatment. This is all done by pre-programmed computers based on the numbers Dave and Eric enter.

As water flow increases from storm events, the dosage of alum also increases. The storm pipe can only handle a maximum of 5 cubic feet per second so anything beyond that bypasses the alum treatment process and goes directly into the nearby wetland system and then on to Tanners Lake.

Dave and Eric’s normal water quality duties require them to monitor the operations at this plant including alum dosage, water flow and rates, pH levels and other perimeters.

I asked Dave to show me around the rest of the site to see the other parts of the cleaning operation.

We then headed to another locked box. This one Dave actually climbed into and down into the darkness below.

When Dave climbed out of that chamber we left the area and crossed the road to the other side where Eric was busy collecting a water sample.

I said goodbye to Eric and Dave after thanking them for helping me to understand how the alum treatment plant works.

Feeling satisfied that I now knew where Dave and Eric had gone, I decided to head downstream to explore how stormwater makes it way to Tanners Lake after it leaves the alum treatment facility. Along the way, I discover a few other tricks the watershed district has up its sleeve to protect Tanners Lake.

I drove, following the pathway of the water. This is what I discovered.