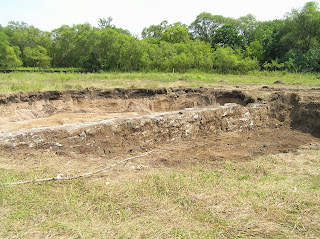 This is no ordinary wall at the bottom of an ordinary hole, my friends

The hole is new and a story of its own, but the wall is so old that it called for a real live archeological exploration right here in Maplewood as this wall was unearthed. How ancient is it? What stories could it tell of times gone by? What do you think happened after the historical assessment was complete? Museum? Strip Mall?

Welcome to the “Lost City of Gladstone,” and the site currently known as Gladstone Savanna.

Footprint of the Past
By Ginny Gaynor, Natural Resources Coordinator at the City of Maplewood

If you stood at the corner of Frost and English in the 1890’s, you’d be assaulted by the clang and clamor of the Gladstone Shops – a railroad repair operation complete with roundhouse, repair shops, and a 640-foot well. This was the heart of the “Lost City of Gladstone,” the historic center of what later became the city of Maplewood. By 1915, the railroad had pulled out and the buildings became warehouses for other businesses. Many Maplewood residents today remember the brick shops that graced the site until the late 1970’s when the last building was demolished. Maplewood purchased the site for open space in the 1990’s and named it Gladstone Savanna.
﻿

﻿
﻿﻿When Maplewood set forth to develop a master plan for Gladstone Savanna Neighborhood Preserve, they knew it had great opportunities and challenges ahead. The preserve was rich with stories – a railroad history, toxic soils, a 1970’s era stormpond, a craggy bur oak with hinting at a long-gone savanna landscape, and a neighborhood in need of a natural area and playground. The task was to successfully integrate these stories in a master plan that balanced history, natural resources, and recreation.

In 2011, Maplewood staff, consultants, and residents developed a master plan for Gladstone Savanna. The railroad history of the site became a driving force in the plan and is evident in many design elements. The straight lines and broad curves of the trails reflect the original tracks on the site. Pergolas over some of sections of the trail cast shadows reminiscent of rails. A special seed mix marks the footprint of the shops. And corner stones are called for at some points along the building foundations.

With the master plan in place, Phase I Improvements at the Savanna began in 2012 including brush removal, soil remediation, construction of stormponds and trails, and historic investigation.

In the 1980’s, a stormpond was constructed on the west end of the Gladstone Savanna site. This was an era of holding ponds. The rectangular basin received only the large rainfall events and was built to protect the neighborhood from flooding. Stormwater from most rain events bypassed the basin and went directly to Lake Phalen.

The sandy soils on the site are ideal for infiltration and Maplewood’s design team knew it had an opportunity to improve the basin aesthetics and help improve water quality at Lake Phalen. Early in the design process, the consulting engineer and city staff met with staff from Ramsey-Washington Metro Watershed District (RWMWD) to explore ideas. The project fit well with the District’s goals and in 2012, RWMWD’s board awarded a $265,000 BMP cost-share grant to the city to help cover costs of the stormwater system. 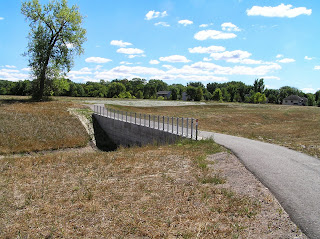 The stormbasin design for Gladstone Savanna is a two-cell system. Runoff from a 115-acre developed area is piped into the first cell, where the sediment can settle out. If the water levels rises enough, water flows to a second cell where it runs down a rock dry creek bed and spreads out into the infiltration basin. The basin can capture and infiltrate a 1.5” rainfall event. A trail perched on a concrete wall bisects the two cells. During a heavy rain, you can stand on the trail and watch the water flow from one basin to the next. Numbers etched into the wall mark elevations for the 2-year, 10-year, and 100-year storm event. The stormponds were constructed in 2012 and are being seeded with native prairie species in 2013. Future phases call for intensive planting along the dry creek and interpretive information for the stormwater system.

In addition to a fascinating history, the railroad also left behind contaminated soils. The master plan’s solution to remediating that contamination involved rethinking stormwater management for the area. This in turn led to opportunities for natural resources restoration, recreation, and interpretation.

Extensive soil testing was done on the site in 2007 as part of a Phase II Investigation and the City entered into the Minnesota Pollution Control Agency’s Voluntary Investigation and Cleanup Program. The approved soil remediation plan required that the City remove soil in one small area and cap several acres of the site with two to three feet of soil. Carving out and shaping the new storm basins provided enough clean soil from the western portion of the site to use as fill for the remediation.

When construction began in 2012, protecting the integrity of historical features at the site was a priority. Maplewood hired Archeo-Physics LLC to use ground-penetrating radar (GPR) to determine whether there were foundations and debris under the soil surface. GPR is a non-invasive technology that uses instruments on the soil surface and does not require exposing the foundations. The crew surveyed approximately three acres of the site and found many intact foundations. In addition, the study included a Light Detecting and Ranging Analysis (LiDar). The images from both studies are quite edifying and can be viewed at: www.archaeophysics.com/gladstone. A grant from the Minnesota Arts and Cultural Heritage Fund supported this historical work.
﻿﻿

The geophysical study was done early in the construction process and the city was able to use the results as a guide during soil remediation. The investigation showed there was a 50’ section of foundation under an area of toxic soil that was going to be removed. During excavation of the soil, the city had an archaeologist from Summit Envirosolutions on site to document the structure.   After the toxic soil was removed, clean fill was added and the foundation was buried again.
﻿﻿
As brush was cleared from the site and the trail was excavated, more structures were exposed at the soil surface especially in the area of the roundabout. The archaeologist was able to document these as well. This documentation will become the basis of future efforts to nominate the site to the National Register of Historic Places.

Majestic cottonwood trees stand sentry along the north border of Gladstone Savanna. We joke about having a “cottonwood savanna” rather than an oak savanna. But the master plan takes a long-term approach to restoring native plant communities at the site. The core of the site will be seeded with prairie grasses and wildflowers in fall 2013. In coming years, scattered oaks will be added. As the cottonwood trees die, there will be oaks in the subcanopy ready to take their place.

The undisturbed areas of the site include a few pockets with prairie species. These prairie areas will follow a different restoration path: a prescribed burn, selective removal of invasive species such as knapweed and brome, and then interseeding. Future phases of restoration include restoring the degraded woodland along the south border to oak woodland vegetation. The woodland screens homes to the south and restoration efforts will balance removal of invasive trees and shrubs with planting of native species in a way that ensures screening is maintained.

Gladstone Savanna is one of 14 Maplewood Neighborhood Preserves. Each preserve is unique and offers different opportunities for human access and passive recreation. Because of the Savanna’s location, flat terrain, and “start-from-scratch” restoration, the site was a good candidate for asphalt trails. This gives people of all abilities a chance to access and experience a bit of the natural world. When the trails were installed in fall 2012, use of the site increased immediately.

Adjacent to the Savanna is Gloster Park, which has a small playground and soccer field. The play equipment is aging and a new playground was on the must-have list. The master plan integrates the playground into the Savanna so children will one day play, swing, and climb surrounded by prairie grasses and flowers. The soccer field was displaced by the new storm basin and a new soccer field will eventually be installed at Flicek Park, just north of the site.

Looking to the Future

The improvements at Gladstone Savanna are being done in several phases. The first phase, completed in 2012, focused on soil remediation and construction of storm basins and trails. This fall restoration experts from Minnesota Native Landscapes are eradicating weeds and will seed the prairie. In winter, they will continue invasive brush removal in selected areas. Future phases of the project will include: planting native plugs and shrubs in the storm basins, enhanced landscaping at the entrances, benches, playground, interpretive features, additional restoration work, and a sidewalk and street parking along Frost Avenue.

If you venture out to the Savanna in the next few years, bring along a bit of imagination. This initial stage of restoration is usually stark and then becomes weedy. But one day prairie grasses and flowers will flourish here, kids will play surrounded by nature, and visitors will have a glimpse of the site’s cultural and natural history. And when it rains, the storm basins will fill and then slowly infiltrate, nourishing plants along the dry creek and breaking down stormwater pollutants that were once destined for Lake Phalen. 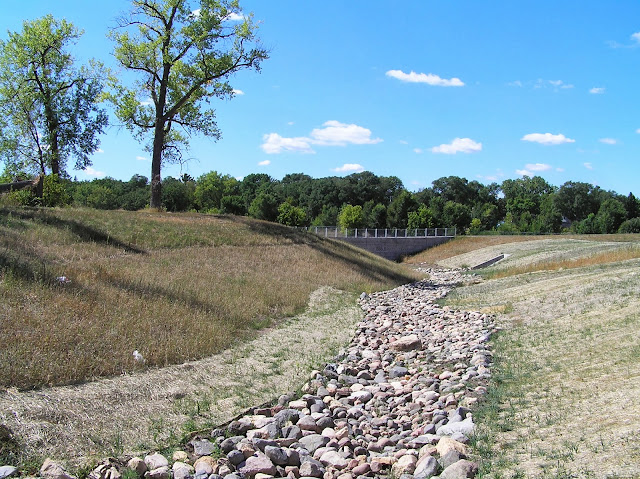 [Gladstone Savanna is at the southwest corner of Frost Avenue and English Street in Maplewood. From Highway 36 and Highway 61, go south on 61 about 1.5 miles to Frost . Go east on Frost about .6 miles. Park in the neighborhood.]