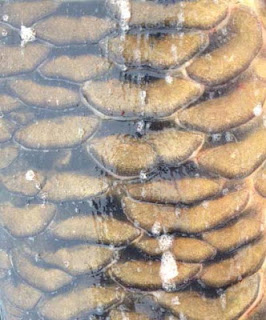 Can you guess what we’re looking at this month?

If you guessed tree fungus, you’re close.  It is a living thing that most people find unpalatable.

If you guessed a fish, you’re much closer.

In fact you’re dead on, but what fish has such unusual and nonuniform scales?

You are looking at a close-up shot of a mirror carp. The mirror carp is a genetic variant or strain of the common carp (Cyprinus carpio L.).

The fish in the pictures above and below was unique among many common carp that we caught in a seine netting operation we did in conjunction with the U of MN and a commercial fishing crew a couple weeks ago in late February.

You may be familiar with water quality problems that are associated with the common carp. If you’re a frequent reader of our eNewsletters, you are probably also familiar with the work that the University of Minnesota and RWMWD have been doing to manage carp populations in local lakes. But for all the trouble they are and the havoc they stir up in our lakes, we have to admit the common carp are interesting beasts.

The mirror carp that we are highlighting in this Mystery of the Month stands out against the other common carp because of scale patterns.  There isn’t a clear consensus amongst our researchers on classifying something as a mirror carp or another variant called leather carp.  Generally speaking, mirror carp have patchy large scales and often have scales only along the dorsal edge (top fin) of the body and/or along the lateral line (side edge), whereas leather carp usually have no scales or just a few scales near the tail.

In the Phalen Chain and in other lakes studied by the U of MN researchers, it is estimated that about 1 out of 1,000 carp are mirror carp.  Justine Koch, one of the researchers, says she’s seen two in Lake Gervais and one in Casey Lake (see photo below).

Interestingly, according to another U of MN researcher, Przemek Bajer, mirror carp are very prevalent in some parts of Europe (Germany/Poland) and make up closer to 80% of the carp there.

It is believed that mirror carp are a strain of domesticated carp bred by European monks.  Some say they were bred that way so they were easier to prepare for food.

Historical food source, abounding survival mechanisms, interesting subspecies, but potentially devastating to our local lakes.  That’s quite the resume for a critter our lakes can do without.

Stay tuned for upcoming stories regarding our collaborative work to manage the common carp.

*For more information on carp, look for more articles in this blog with the key word ‘carp,’ or look to these sites