I got my first taste of fishing on a big lake up north. I will always remember it – the birch trees along those long, dark, winding forest roads as we drove toward our destination in the wee hours before dawn. Sitting for hours in our boat surrounded by white curtains of fog and rolling on those interminably rocky waves. Finally, as the mist dispersed, we could see water for miles in every direction.
﻿﻿

“I rose oh so early in time to see the fox chase the badger around the green bush -” It was a phrase indelibly imprinted in my four year old mind to help remember the names of the towns between my grandparents’ home, Green Bush and Lake of the Woods near the border of Canada where I first tried my hand at fishing. Hint – these are the town names: Roseau, Fox, Badger and Green Bush. I cherish those early recollections of sitting in a boat with Grandma Mabel and Bill (skip the Grandpa – he liked the familiarity of first names) and hanging out for hours in a boat with a fishing rod in hand with my grandparents and sister, reeling in those walleyes and northern pike.

Today, the taste of crispy walleye melting in my mouth, whether it’s off my own grill or State Fair fare, still takes me back to those days when my grandma would send my sister and me home with milk cartons stuffed with our own freshly caught walleye fillets frozen in ice for the long drive home back to west central Minnesota. But since I’ve grown up I’ve wondered whether I can still safely eat the fish in Minnesota lakes and especially here in the Twin Cities lakes.

Are walleyes today as safe to eat as they may have been in my childhood during the 1950’s?
The answer depends on who you are, where you fish and in some cases, the size of the fish. Read on to get to the answers.

Since May brings on the annual fishing opener for the season, it’s a good time to review the information gathered in the State of the River Report’s section about fish consumption in the Mississippi River. I’ll also provide a closer look at the Minnesota Health Department reports about fish in some of our own watershed lakes.
﻿

﻿
You may remember back in 2007 when the state reported that they had found levels of perfluorinated chemical PFOS (an industrial chemical once made by 3M Company) in several fish species in metro lakes (Lake Calhoun, Phalen, Lake Elmo etc.) prompting new fish consumption guidelines. Phalen, Gervais, Gervais Mill Pond, Round, Keller, Kohlman and Spoon Lakes in our watershed were evaluated at that time for PFOS. (St. Paul Pioneer Press article on 08/17/2007 See link at. http://www.twincities.com/ci_6643590)

Since then the state has reevaluated and set Statewide Safe Eating Guidelines based on Polychlorinated biphenyl (PCB), PFOS and mercury levels measured in fish throughout Minnesota. While not all waters have been tested for contaminants, these guidelines can be used for both tested and untested waters. There are two types of guidelines: those for women who are or may become pregnant and children age 15 and under, and those for everybody else.


The Minnesota Department of Natural Resources (DNR), the Minnesota Pollution Control Agency (MPCA), and the Minnesota Department of Health (MDH) collaborate to assess fish, analyze the data and produce the fish consumption advisories. Each year, the DNR collects fish from lakes and rivers for testing. Minnesota has around 6,000 fishable lakes. Fish from over 1,000 lakes and streams in Minnesota have been tested for contaminants. Waters are selected for sampling where angling is popular, where there is a known or suspected pollution source, or where fish contaminant trends are being tracked. The guidelines are based on the contaminant level measured in fillets.

What are some contaminants in fish?
Mercury is found in most fish tested from Minnesota lakes. It’s a toxic metal that can impact the nervous system, particularly in children and the developing fetus. PCBs are found mainly in Lake Superior and major rivers such as the Mississippi River. PCB, a probable carcinogen, is linked to problems in infant devel­opment and adult immune function. PFOS, a type of PFC has been found in some fish in Minnesota. Perfluorochemicals (PFCs) are used to make products that resist heat, oil, stains, grease and water such as Scotchgard and fire foam retardants. The MPCA is investigating the sources of PFCs in fish. There are a lot of potential health risks that are under investigation. Here’s a link to some studies related to PFOS: http://en.wikipedia.org/wiki/Perfluorooctanesulfonic_acid.

Walleye and some other predator fish such as northern pike tend to surface on the higher consumption restriction lists for both the general population and lists for pregnant women and children under 15 in urban lakes and the Mississippi River. Walleyes longer than 20 inches, northern pike longer than 30 inches and muskellunge should not be eaten either from the river or any lake in the state by pregnant women or children under 15. The explanation: bioaccumulation. The contaminants build up at a rate faster in species that consume other fish.

Follow these tips when eating fish:
While mercury and PFOS cannot be removed through cooking or cleaning (they are in the flesh of the fish), you can reduce exposure to contaminants like PCBs by removing fat when you clean and cook fish. Contaminants tend to accumulate in the fatty tissue of fish. Trim skin and fat, especially belly fat. Also, eat fewer fatty fish such as carp, catfish, and lake trout. PCBs build up in fish fat. Replace them with pan fish such as blue gills and crappie and eat smaller fish.

What are state health department recommendations for consuming fish from the Mississippi River?
There are site-specific eating guidelines in place for the metropolitan portion of the river. Different sections of the river have different consumption guidelines. When I checked this data, several species rose to the top that have the highest restrictions for the general population because of mercury levels. It’s recommended that people eat only one meal per month from the Mississippi River for these species: channel catfish, flathead catfish and white bass. This list expands to also include northern pike and walleye when you are pregnant or a child under 15.

There are also quite a few species restricted to one meal per week for the general population including large-mouth bass, northern pike, small mouth bass, walleye, carp, bluegill, buffalo, crappie and freshwater drum. Please consult the tables in this link below for site-specific information. Restrictions may be due to one or more contaminants including mercury, PCB or PFOS. Site specific information is available through the Minnesota Department of Health at this link.

What are state health department recommendations for eating fish from our RWMWD lakes?
The link above provides this data for all lakes that have been tested in Minnesota.  A snapshot of that information includes a caution that walleye from Lake Phalen are not safe to be eaten by women who are or may become pregnant and children under 15.

For a quick easy way to get your consumption guidelines, depth maps, fish species found in a lake and much more, go to DNR Lake Finder.  Simply enter in the lake you’re going to and click “Get Lake Data.”  You’ll be given a table to link to all sorts of great information including the MDH guidelines all in one place.

In conclusion, while there are a number of species that have restrictions limiting consumption to one meal a month or none at all, there are still a lot of fish in our local watershed lakes and the Mississippi River that can be eaten without concern. But consult the consumption tables and pay attention to where you are catching them! 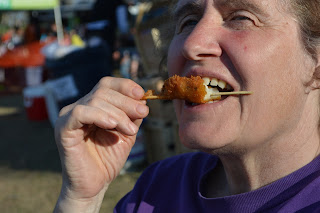