Though the plants are now maturing in our first demonstration site, the process was not without a few hurdles, many lessons learned, and one major geographical change.  We’ll come back to that but let’s back up for a moment and explain what a ‘living street’ is. 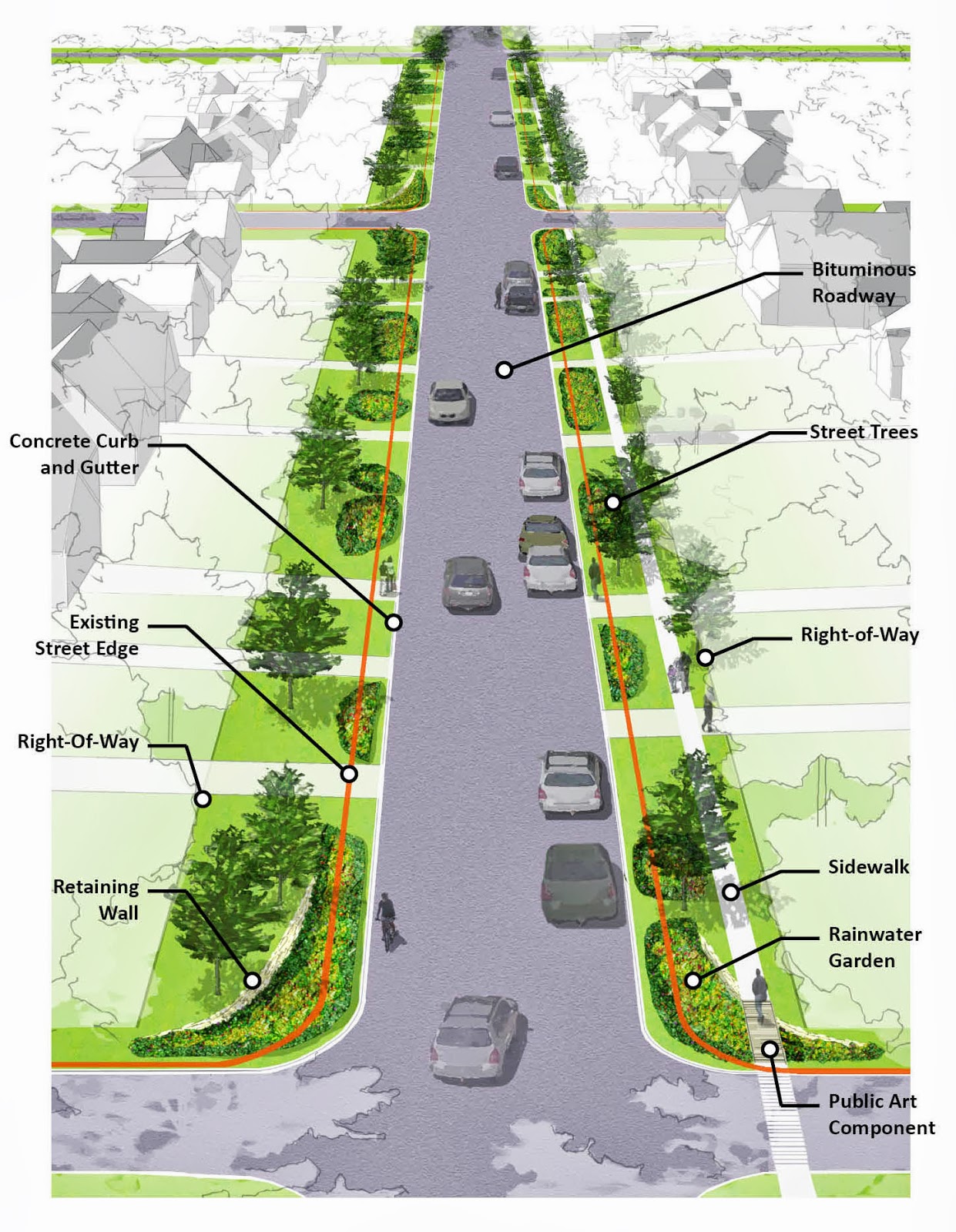 What is a Living Street?

The term “Living Streets” was coined by the North St. Paul Living Streets Task Force to describe a new type of street that will eventually replace most of the city’s existing streets. A common term used in other parts of the country is ”Green Streets” or “Complete Streets.” The Task Force decided that the term “Living” better described what was being achieved by changing the streets to provide more comprehensive quality-of-living benefits to residents.

Living streets are narrower and have less pavement than existing streets. Reducing the width of existing streets reduces stormwater runoff, construction costs and assessments to residents. It allows room for the installation of rainwater gardens to treat stormwater. Where there is a need, bike trails and sidewalks may be installed. Narrower streets also provide more room for trees.

Unlike existing streets that are only designed for cars, liv­ing streets are designed for cars as well as people and the environment. Rainwater gardens and street trees remove pollutants from stormwater before the water enters area lakes, helping to improve lake quality. Narrower streets and street trees also slow traffic, creating a safe environment for everyone. Bike trails and sidewalks make it easy for all residents to exercise and connect with neighbors.

Living streets will vary depending on the street function and location in the city. The Living Streets Plan includes design templates for three different types of streets and concepts for busier collector streets.

Living Streets are designed to balance safety and convenience for everyone using the street. Elements of a Living Street may include:
• sidewalks on one side
• bike lanes (or wide paved shoulders)
• parking
• marked street crossings
• pedestrian signals
• comfortable and accessible transit stops
• rainwater gardens
• trees
• vegetation

What are the benefits of Living Streets?

In 2010, the District applied for a Clean Water Fund grant to assist in design and construction of a ‘Living Street’ demonstration project. We knew that this new approach would meet some resistance from City staff and residents, but our hope was that the benefits would far out way the perceived negative changes. This demonstration project was intended to serve as a site where future residents, city staff and elected officials could see how this new type of street looks and functions.

Following adoption of the Living Streets Plan in early 2011, the North St. Paul City Council authorized proceeding with project planning and design for a Living Streets project on 15th Avenue. Staff involved the residents in a process to design the street and locations of rain gardens, sidewalks and trees. There was strong support on the part of some of the 69 property owners, but there was also some organized resistance to changing the street design and the plan to include a sidewalk on one side of the street.

Ultimately, in October 2011, the City Council decided that the opposition was too great and declined to order the completion of the project. Following this action, District staff approached the City of Maplewood to gauge their interest in completing a demonstration project with our grant and match funds.

The City of Maplewood was just beginning the design process for a street replacement project in the Bartelmy-Meyer neighborhood. The City was excited to participate and staff began working with the City and neighborhood on a Living Streets design.

The Living Streets Come to Life

The project planning in Maplewood was authorized in late 2011 and approved in spring of 2012. Construction on the project began in June 2012 and completed in October.

Streets were narrowed from 32 feet wide to 24 feet and 1.5 miles of sidewalks were added, but overall pavement was reduced by 1 acre compared to a conventional 32 foot street replacement. The project also included construction of 32 rain gardens, 1 regional infiltration rain garden and 200 drought resistant trees in street boulevards. It is estimated that the project results in sequestering 40 tons of CO2 every year. These changes result in improved function and livability for the neighborhood. The estimated total phosphorous removed for the project is 11.6 pounds per year. As a result of the project we now estimate that 50% of the stormwater is filtered or infiltrates, 10% runs off, and 40% evaporates.

In early 2013 the District also paid for the addition of etched rain drop ripples in the sidewalks as part of the Districts Watershed Public Art initiative. The ripples were installed adjacent to each of the rain gardens as an artistic way to provide an educational message about stormwater runoff and the function and benefits of rain gardens. 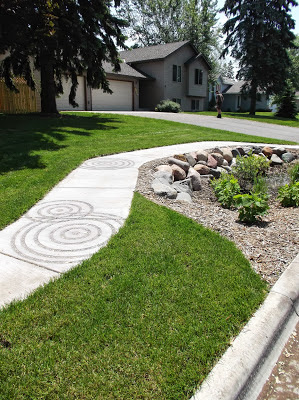 Plans for the Future

The District hopes that future street projects incorporate this Living Streets design. We have shown that residential streets do not need to be as wide as they are today. We generally have more parking than needed and the benefits of traffic-calming and on-site stormwater management are important. We have shown in past studies that we need to reduce impervious surfaces in the District if we are to meet our water quality goals. Reducing street width has to be a major strategy to meet this goal.
Maplewood has completed and adopted a Living Streets Policy. This policy will be used in the design of all future street improvement projects. We encourage other cities to follow this approach. The District is currently examining how we will both encourage and support this change.

*The Living Streets plan is available at the District web site, www.rwmwd.org in the Library section under Technical Reports