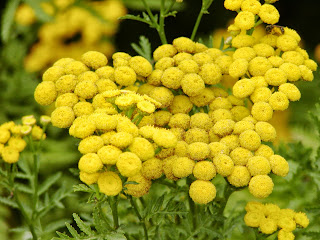 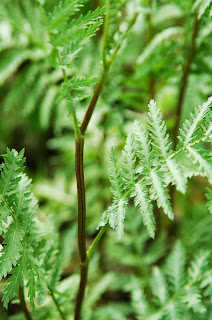 This bouquet of sunshine can actually be a management nightmare on any property.

Common tansy is a perennial brought to North America from Eurasia.  Introduced for medicinal, horticultural, insect repellent and embalming purposes, it is now spreading into wild areas in the Upper Midwest and Canada.  Like many invasive plants, tansy escapes cultivation meaning it easily spreads from where people intentionally plant it.  From there it invades open, disturbed habitats, roadsides, grasslands and waterways.  Thousands of seeds are spread by mowing after blooming begins.  Seeds will form on flowers even after they are cut from the plant.   Seeds are also transported to new areas with fill from gravel pits.


An embalming flower that will produce more of its species and run amok even when dead, dying, and headless?  Sounds pretty zombie-like to me.  Perhaps “mummy weed” would work better, but it’s not as catchy.  I digress.
Tansy grows 3 to 6 feet tall, with alternate, bi-pinnately compound leaves.  The waxy, fernlike leaves are strongly aromatic when crushed.  Blooming from July to October, the button-like yellow flowers are up to 0.5” wide, and grow in clusters. Tops of flowers become rounded and turn a dirty-yellow color, then brown with age.  One plant may produce up to 50,000 seeds. 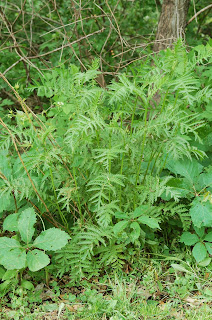 Tansy is listed as a prohibited/control species on the Minnesota Noxious Weed List.  Control is required by Minnesota Statutes in order to reduce established populations and prevent further spread.  It is illegal to propagate, sell or transport this plant.
Control Methods: pull or dig up rhizomes of small patches in early spring prior to flowering.  Mow before flower buds appear or open.  Do not mow after flowering begins.  After flowers open, clip them off and place in a black plastic bag and leave on site in a sunny location.  It is illegal to transport any part of the plant without a permit; including bringing it to a compost site or disposing in the garbage.  Toxic!  Wear gloves when handling!

Do you know of a roadside or public area with a large amount of Tansy?  Contact our Ramsey County Cooperative Weed Management Coordinator, Carol Gernes, at carole.gernes[at]rwmwd.org or 651.792.7977. 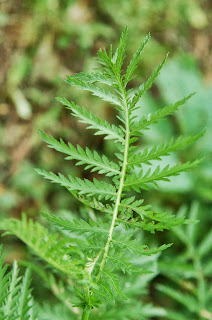