by Stephanie Wang and Linda Neilson 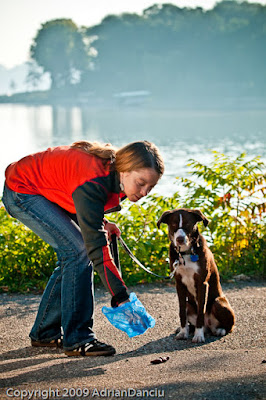 Spring is a great time to get outside, except when you have to watch your step in your yard, on the sidewalks and in the parks for the occasional dog dropping. Most would agree that dog droppings are smelly and gross. It ranks as one of the top complaints received by staff members from the City of Woodbury’s Environment and Parks Departments.

To address the issue, Master Water Stewards Stephanie Wang and Linda Neilson attended the Central Bark Pet Expo in Woodbury on February 18, 2017, to talk to attendees about picking up and properly disposing of dog “doo” in order to help improve water quality.

The Environmental Protection Agency estimates that the typical dog excretes three quarters of a pound of waste per day — or 274 pounds per year. About a third of Minnesotan households own dogs, a total of over 930,000 dogs.[1] In one year Minnesotan dogs will produce over 120,000 TONS of waste, a mass exceeding the total weight of 65,00 typical school buses each weighing 18 tons.
Unfortunately, allowing dog waste to decompose where it falls is a problem, even if it’s on your yard. Dog waste carries viruses, bacteria and parasites that can transmit disease to humans and pets. A day’s waste from a typical dog can contain 7.8 billion fecal coliform bacteria as well as host Giardia and Salmonella.[1] Melting snow or heavy rainfall eventually washes dog waste left in yards, parks and on sidewalks directly into our lakes, streams and wetlands. Once in our waterways, the dog waste, which is high in nitrogen and phosphorus, promotes aquatic plant and algae growth. 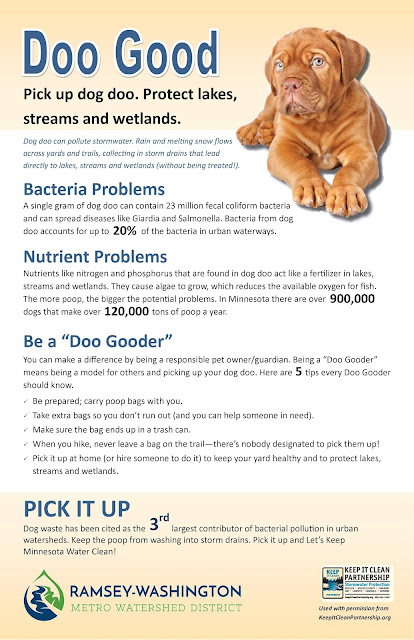 The “Doo Good” message focused on picking up after your pet to protect our lakes, streams, wetlands and the health of both humans and pets. Master Water Stewards Linda Neilson and Stephanie Wang created a poster and tags reinforcing this message and developed a plan to engage people at the Woodbury Pet Expo in order to actively engage people of all ages.

They asked adult pet owners to mark where they walk their dog using a dot on a Woodbury map and then to write down one idea about how to motivate everyone to pick up dog waste. In exchange for their input, the participant received a Milk Bone tagged with “Doo Good” reminders and a dog waste bag. The bag giveaway provided a chance to role play handing a spare bag to a fellow pet owner while saying “Do you need a bag?” to prevent them from walking away from their pet’s waste.

The team also offered cat stickers to passing children. They encouraged children to think about how snowmelt or rain flows across yards and down the street, carrying trash like dog waste into the storm drain and directly into a water body without treatment using the “Your Street Connects to Lakes & Rivers” display.

Activities that Worked Well during the Expo 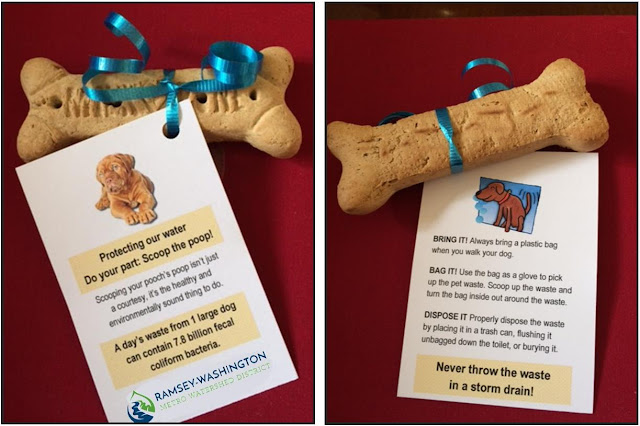 Some Interesting Comments from Attendees
At the end of the four-hour Woodbury Pet Expo, the Master Water Steward team relaxed and reflected on their achievements. With the support of Ramsey-Washington Metro Watershed District staff, they had created a low-cost campaign reaching over 84 adults and 45 children at this one-day event.
How can you be a “Doo Gooder?”