As the saying goes, “We’ve come a long way, baby”, in understanding the role of carp in our local waters.

The Watershed District is shifting gears from research to a management and monitoring approach with the knowledge we’ve gained over the past six years. Who would ever have guessed that we would arrive at this step when we first ventured into this business of trying to understand and get a handle on carp?

The common carp (Cyprinus carpio) is a non-native invasive fish species to Minnesota. It is a long-lived fish (over 60 years) that is now prevalent in most metro area lakes. They are intelligent creatures with a voracious knack for survival.

“Carp are smart and they understand the topography between the lakes. One of the things we’re learning is they will overwinter in the deep-well oxygenated lakes. They aggregate in these places and then migrate in the spring to spawn in upstream small wetland “nurseries” where native fish have a hard time surviving because of lowered levels of dissolved oxygen in the water.” – Dr. Peter Sorensen, University of Minnesota


Carp root around in lake and pond bottoms for food. They hunt down aquatic invertebrates, seeds, and other plant parts. This activity, along with carps’ excretion of nutrients, can have negative impacts on lake water quality and aquatic plant communities. Carp densities over 90 pounds per acre typically result in negative impacts to lake systems.

What are those negative impacts? When carp stir up the bottom of a lake or pond, phosphorus from those bottom sediments can be re-suspended in the water column. This disturbance increases this nutrient’s availability to aquatic plants and algae leading to underwater plant population spikes and algae blooms. Water clarity decreases.


As the summer season moves along, bacteria use dissolved oxygen to break
down those decomposing plants and algae. Dissolved oxygen levels drop, impacting native fish, macroinvertebrate and other aquatic populations that need higher levels of dissolved oxygen for spawning, reproduction and survival.

What has been the Watershed District’s involvement in carp research and management in the past six years?

In 2009, the Watershed partnered with the University of Minnesota’s Sorensen Lab on an applied research project to investigate carp in the Phalen Chain of Lakes. The main objectives were to: 1) determine the abundance of carp; 2) identify spawning areas; and better understand what influences carp recruitment (maturing from an egg to an adult). The watershed funded this work along with the Legislative-Citizen Commission on Minnesota Resources (LCCMR).

Over the last six years, we have made substantial progress in understanding the carp population and ecology in the Phalen Chain. Through research and management, we have reduced the adult carp density by over 60 percent, from 158 pounds per acre to 55 pounds per acre (average biomass for Kohlman, Gervais and Keller). We have located the key spawning areas in the Chain and are actively working to eliminate the juvenile carp in these systems (e.g., Casey Lake, Markham Pond and Kohlman Basin).

What are the latest plans for controlling carp in the Phalen Chain of Lakes?


The Watershed will be working with a new company called Carp Solutions, LLC to continue adult carp removal on a limited basis and to monitor juvenile carp nursery areas.

Dr. Przemek Bajer, who worked with Dr. Sorensen, has started this company in order to provide  technical support to agencies that are managing carp on a large scale. These management services are not available through the University of Minnesota. The new Aquatic Invasive Species Center at the U of MN will only focus on research.

﻿﻿﻿Natural resources staff will be working closely with Przemek and his staff to trap adult carp and to collect and process monitoring data. This effort is critical in continuing to manage carp in the Phalen Chain.

Because of its small size and shallow depth, Kohlman Lake is especially well suited for the summer removal of adult carp to reduce their biomass in the Keller-Gervais-Kohlman system. District staff will place three box nets (30 x 30 feet) each in a different area of Kohlman Lake in August. Each net will be baited with dry corn for approximately 7-10 days to train carp to aggregate at the bait (Bajer et al. 2010).

Once corn consumption is steady, they will lift the trap early in the morning when most carp are attracted to the bait, to capture and remove them. The process will then be repeated at least one more time, involving approximately one week of baiting to attract new fish. The exact protocol will be modified depending on the behavior of the carp.

Watershed staff will help with routine baiting and check-up. Captured carp will be counted and measured for length. Their number will be subtracted from the most recent population estimate to determine the biomass of carp that remains in the lake. 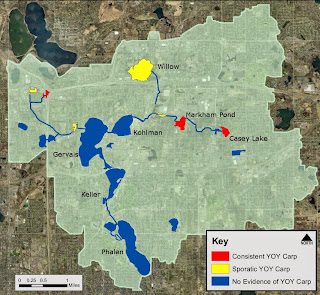 These surveys will be conducted in lakes Casey, Markham, Kohlman Basin, the three Owasso Basins and Willow Lake. In each lake we will set five small-mesh trap nets (Bajer et al. 2012). The nets will be set for one 24-hour period in September 2015. Captured carp will be counted and measured and the catch rate of age-0 carp will be estimated based on length structure of collected carp. While conducting these surveys, they will also record catch rates and lengths of native fish.

Because common carp are not damaging at low densities, aggressive efforts to suppress their populations to extremely low levels are often unnecessary and expensive. Robust population dynamics models can be used to guide carp management efforts so that management goals are met without incurring unnecessarily high costs and using most practical approaches. Alternative management scenarios can also be evaluated to develop long-term management plans.

We will modify an existing carp population dynamics model (Bajer et al. 2015). to mimic carp population dynamics in Phalen chain of Lakes. We will then use the model to evaluate the effectiveness of several plausible management strategies, including, winter seining, summer removal of adults with box net, suppression of recruitment in headwater lakes, and barriers to carp movement. Effectively processing new data will further shape the management efforts of the Watershed District.

Here are several videos that document some of the District’s efforts in carp research since 2009:

We’ll keep you posted as time progresses in our on-going efforts to control carp in the Phalen Chain of Lakes.