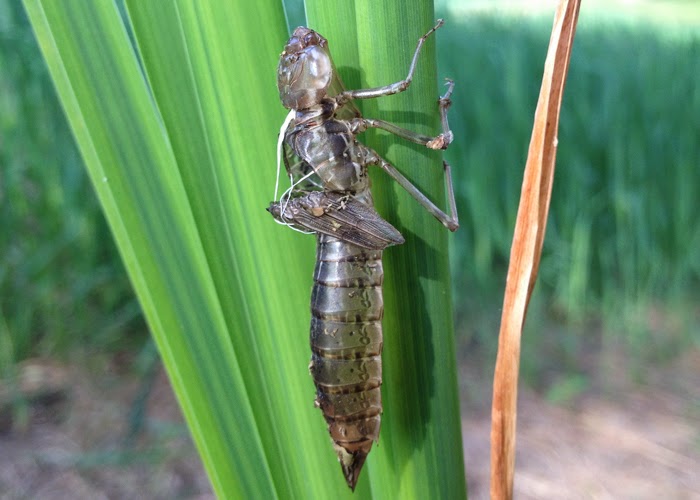 What we captured a photo of here is not an actual insect, but what is left behind – an exuvia – when a dragonfly larva completes its transformation to adult.

If someone mentions dragonflies to you, chances are you will think of the critter with colorful wings and mad flying skills. You may have heard them called “mosquito hawks”, and envision them relentlessly & skillfully reducing the population of those little bloodsuckers. And of course those things are true –but that is not the whole story.

The majority of a dragonfly’s life is actually spent in the water, in the larval form known as naiad or “nymph”. Depending on the species, this life stage lasts somewhere between 2 months and 5 years. Like adult dragonflies, nymphs are voracious predators of mosquitos (in their larval form) but can also be large and strong enough to take down tadpoles, minnows and even small crayfish.

Once the nymph is ready to take that big step into adulthood, it will head towards shallow water and spend some time learning to breathe air. The naiad will then scale the handy stalk of an emergent plant, such as bulrush. Once it has a secure perch, the young dragonfly pushes its head out of its skin (try to imagine that!). If you look carefully at the photo, you can see the hole between the head and the small proto-wings where our model burst through.

As we are only very amateur entomologists we don’t know to which species this guy might belong (if you do know, please share in the comments below!). Whatever kind of dragonfly it is, we like to believe it survived its harrowing transformation and is out there now, doing its best to decimate the population of Minnesota’s “state bird”!