The Watershed Excellence Award that Anna Barker received at the District’s award ceremony in November highlights her key role as a “CITIZEN CATALYST.” Anna navigated the complexity of connecting a governmental agency, Washington Conservation District (WCD), with the interested parties in the private sector and four Carver Lake Homeowner’s Associations (CL-HOA’s) in Woodbury.

Anna is currently a member of one of those Woodbury homeowner’s associations. Starting in 2014, the WCD held a workshop focused on creating interest at the Carver Lake HOAs to implement stormwater Best Management Practices (BMPs). Fortunately for the Conservation District, the workshop attracted one attendee, Anna Barker. Committed to seeing improvements in her neighborhood, she ensured that the decision-makers were engaged and in attendance at the next WCD workshop. Tara Kline, at the WCD, reports that three of the CL-HOA’s are moving through the concept/decision stages of BMP projects. Without Anna’s advocacy, the bridge connecting the Carver Lake HOA’s and the WCD would not exist.

Anna Barker’s green contributions dot the City of Woodbury. She has been a long-time champion for the environment and has been a formal and informal educator for forty years. As she self-reports, since 2005 she has broken her tools as “guardian” of the trails around Carver Lake. She believes that “beauty speaks truth to people’s hearts and leads to personal investment to get involved.”

Anna Barker was a catalyst in convincing her church to install rain gardens at Trinity Presbyterian in Woodbury to prevent run-off from heading to nearby Tamarack Swamp, the District’s “crown jewel” wetland.

She also headed up a team to get rain gardens designed and installed at Crosswinds Arts and Science School where she taught. She engaged students in the care of the school’s two rain gardens for many years, recruited Sentence-to-Serve teams, involved college students in maintenance and engaged other teachers to lead educational activities about the wetland adjacent to the school and nearby Battle Creek Lake. She also initiated a School Forest program at the school.

Anna is a longtime Washington County Master Gardener, a Tree Care Advisor and volunteers at many events including buckthorn busting, Woodbury’s landscaping workshops and native plant sales. She also helps city staff on a variety of environmental projects.

In November Anna Barker was awarded the City of Woodbury’s Environmental Excellence Award for Environmental Education and Awareness, a new category created in 2015. She was chosen to participate in RWMWD’s Master Water Stewards Program in 2016. 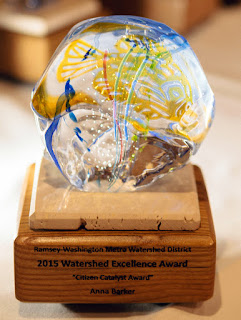 We look forward to continued collaboration with Anna. We thank her for her incredible commitment, creativity and energy for engaging citizens to protect water and improve the natural environment and for her skills in catalyzing people to action!