It was 1994 and Paul Nordell, the mastermind and coordinator of the Adopt-A-River program at the Minnesota DNR had tipped me off about a good place to show kids the cumulative effects and quantity of run-off that comes from our streets and ends in the Mississippi River.

Memories of Mountain Dew……mountains of those green and red cans full of muddy algae, images of sludge and bedraggled Styrofoam detritus, a layer of green “slime”, pieces of bark and soggy branches with slimy plastic bags wrapped all around them, surrounded by piles of cigarette butts floating everywhere have stayed intact in my mind for the past twenty-five plus years. I can remember thinking, “Where do we even start?”

We were near the 35 E bridge and the river – a handful of Expo Middle School sixth graders, their teacher, Peggy, several retired senior volunteers in the Across Generations program and me, all armed with rakes, boots, gloves and lots of garbage bags standing before the mouth of the biggest storm outfall I had ever seen. We didn’t know the term for that structure back then, but we were ready for action. Looming high above us were the streets and storm drains of the Highland Park neighborhood that ultimately channeled their run-off to this location. Our small team was all that stood between this polluted water and its next destination– the Mississippi River. 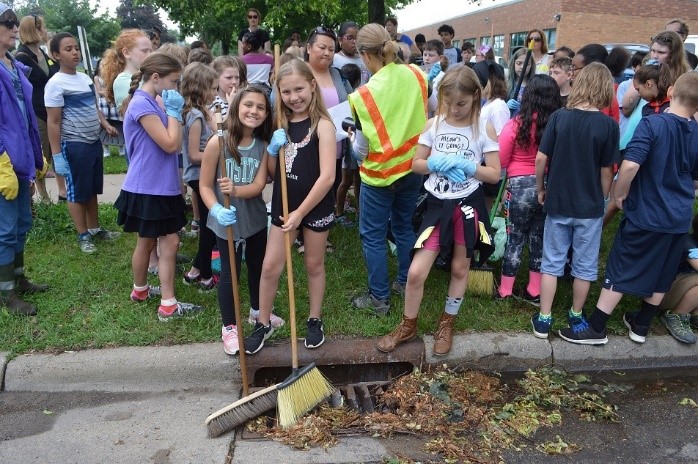 Fast forward almost 25 years to the spring of 2018. The Adopt-A-Drain program had been introduced to the Twin Cities through Watershed Partners. I was cruising down the streets of the Beaver Lake neighborhood in St. Paul trying to keep up with three classrooms of fourth graders from L’Etoile du Nord on a mission to sweep and shovel up grass clippings, leaves, sand and mud after a big rainstorm before it all washed down into the storm drains and then into the nearby lake. Along their route to the lake, the kids were dropping their soggy, heavy-laden bags of this stuff for Tracy and me to pick up as we zig-zagged back and forth along their route. By the time we had completed that mission, my Pontiac Vibe was weighed down with a heavy load of phosphorus-laden decaying matter and sediment that we had prevented from washing into the lake and we were on our way to the county’s yard waste drop-off site.

Six years ago the Center for Global Environmental Education (CGEE) at Hamline University initiated the Adopt-A-Drain program with the support of Watershed Partners, a coalition of more than 70 public, private and non-profit organizations committed to water resource education in the Twin Cities. This “grassroots” program asks residents to protect nearby lakes, rivers, and wetlands by “adopting” storm drains near their homes. Volunteers sweep leaves, trash, and other debris off the drain and nearby surfaces year-round. They also estimate and report the quantity of debris they clean from the drains. 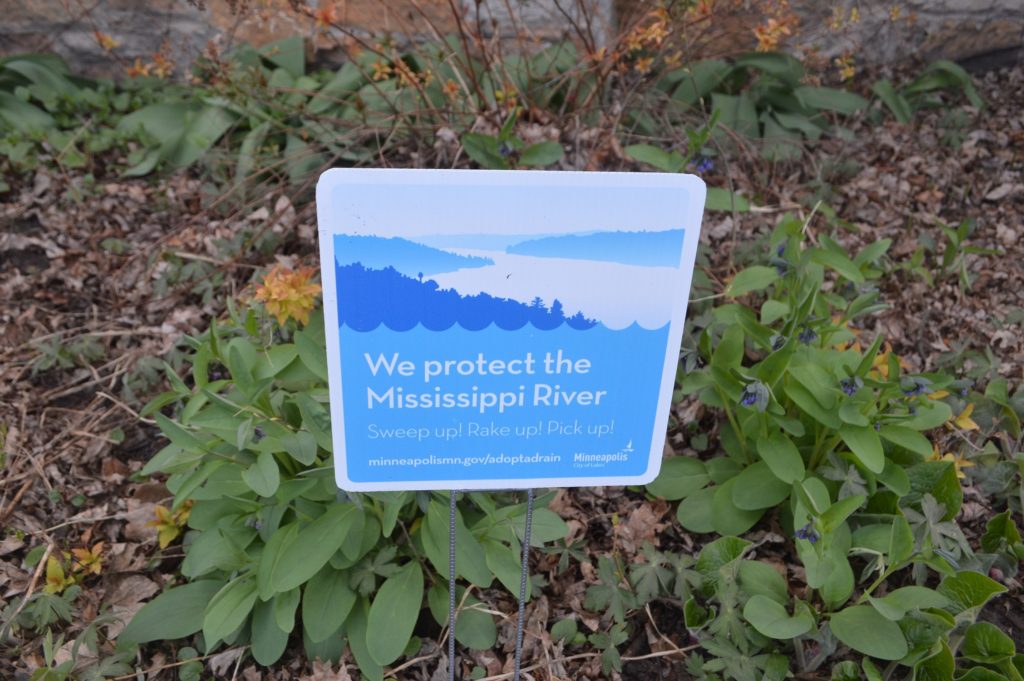 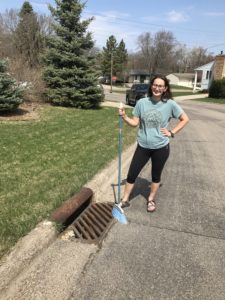 Left: Signs are placed in a residents yards to advertise the program. Above right : Roseville Master Water Steward in training, Sam Radermacher recently adopted two storm drains near her house that drain to Lake Owasso. She nicknamed them Thing 1 and Thing 2. She is working with the rest of her team to promote the program in her neighborhood and around Willow Pond in the Bennett Lake subwatershed. Interest is growing! Adopters have requested signs!

By spending just fifteen minutes cleaning up twice each month, volunteers prevent trash and organic pollutants from flowing through storm drains and into waterways. They are asked to “name” their drains. Going through our data base of adopters, it’s fun to see what people have come up with as nicknames for their drains. Here are a few that stand out: “Very Awkward and Cringy,” “Life in the Fast Drain,” “The Trumpeter Swan Drain,” “Purple Drain,” “Slurpee,” “Rain R Shine,” “The Great Guzzler” and “Lost My Drain of Thought.”

Customized clean-ups are an effective way to empower and energize yourself, your kids, engage a family, a small group of friends or your neighborhood to take ownership of local storm drains and their clean-up.  As we continue to operate with the practice of safe distancing, it’s a viable way to successfully get outdoors and do something helpful for your community and our local lakes, creeks and rivers.

Since its launch in 2014, Adopt-a-Drain’s 6,000 participants have prevented nearly 200,000 pounds of debris from washing down storm drains and into Minnesota’s lakes and rivers. The program has continued to grow and expand to cities around the metro area and beyond. Promotion at the Minnesota State Fair has been very effective in expanding the program. The website adopt-a-drain.org advertises the program, documents the location of drains adopted and those available for adoption and tabulates an estimated amount of debris collected. The program has recently hit its 10,000 adoptions milestone!

Each year, Hamline University students deliver yard signs to residents who have adopted drains in St. Paul to help promote the program. The City of St. Paul’s Public Works Department plays a large role in advertising the program in St. Paul and helping pay for some of the costs. A number of other cities in the metro area, including Minneapolis are doing the same.

An animated video promoting the program has just been completed in a partnership between TPT (Twin Cities PBS) and Hamline University’s Center for Global and Environmental Education. You can see it here: https://www.tpt.org/clean-water-begins-curb/

Ramsey-Washington Metro Watershed District officially joined the program in 2017. We piloted the Adopt-A-Drain program that year in a neighborhood adjacent to Lake Phalen in St. Paul. A team of Master Water Stewards along with their friends and neighbors helped promote the program with door hangers, neighborhood social networking and several public events. The following year Farnsworth students created thank you letters and mailed them to the residents who adopted drains in their Lake Phalen neighborhood. They also did a clean-up of drains near their school. Each year we have engaged youth in helping them understand the connection between drains and the health of the water in nearby lakes and ponds. In turn, they have shared their awareness and promoted the Adopt-A-Drain program in their communities through the distribution of door hangers, thank you letters, art and clean-ups. 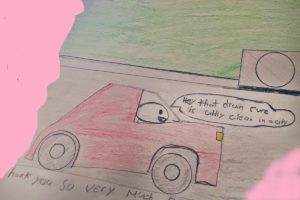 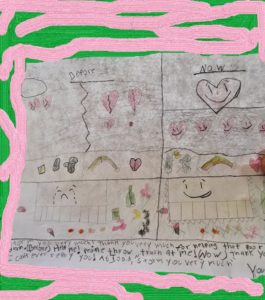 Left: “Hey, that drain sure is oddly clean in a city.”  Quote from a Farnsworth student’s cartoon on a thank you card to a storm drain adopter in the neighborhood. Right: Art tabulation on a card depicting before and after effects of a clean up. On the before side: broken hearts. On the after side, Smiling heart. “Thank you very much for helping that poor drain. Help me! People throw trash  at me! (WOW). I can’t ever repay you!” As I said, “storm you very much!” 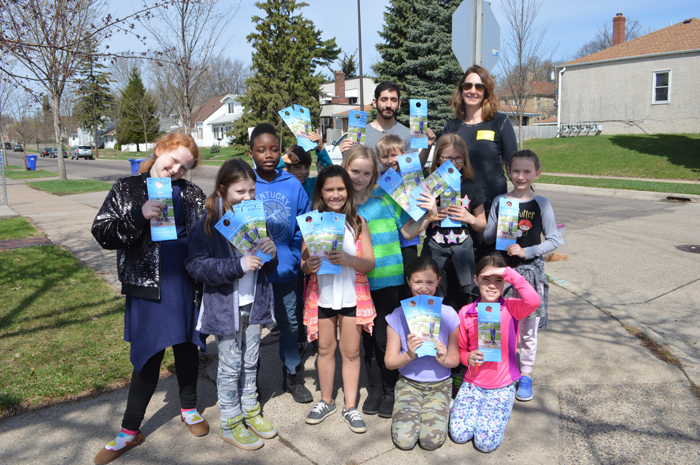 In 2018 L’Etoile du Nord fourth graders distributed 500 door hangers to households in the Beaver Lake neighborhood of St. Paul to encourage residents to adopt their nearby storm drains. The door hangers were translated into Hmong, Karin, Spanish and Somali in addition to English. The classes were familiar with the lake and visited it several times that year. In the fall they did a clean-up across from the lake, removing leaves and debris at a residence and swept up the gutter near a series of storm drains that bring stormwater into underground pipes that discharge it across the street into the lake. 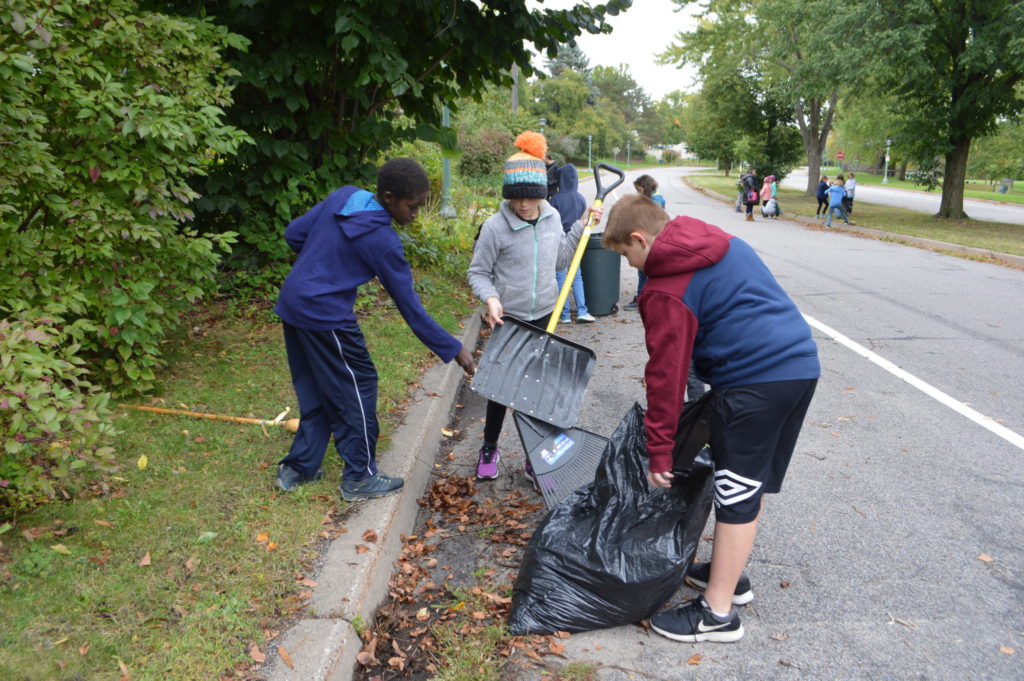 The students traced the route of the water that enters Beaver Lake from the storm drains into an inlet and walked along the sidewalk to the southern end of the lake where it discharges into a section of the Beltline Interceptor and then onto the Mississippi River. 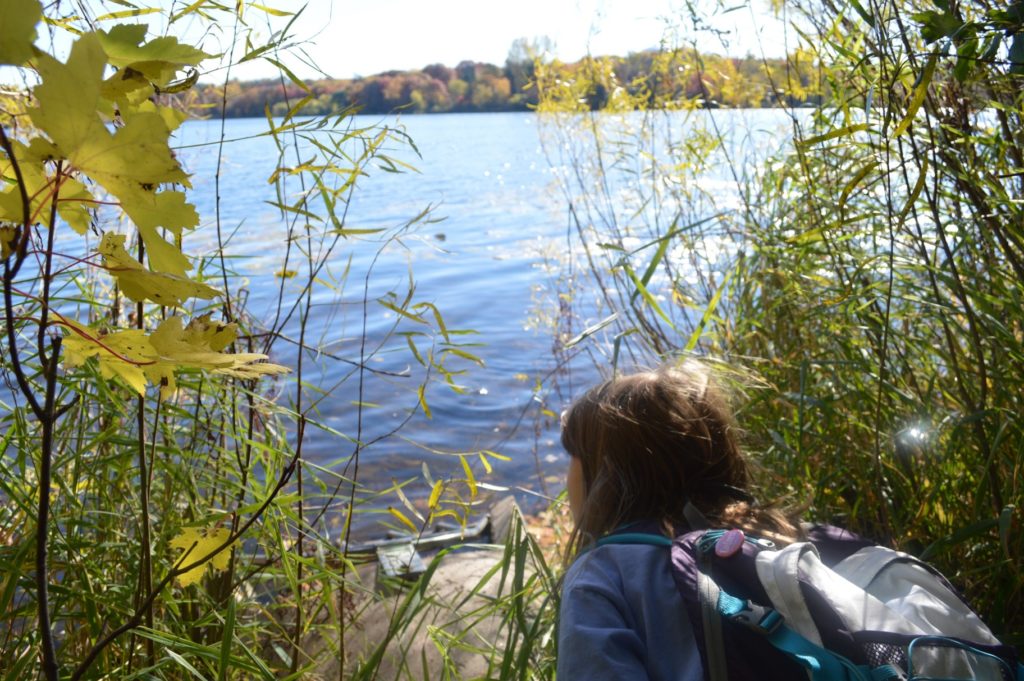 Above: Examining the inlet into Beaver Lake. 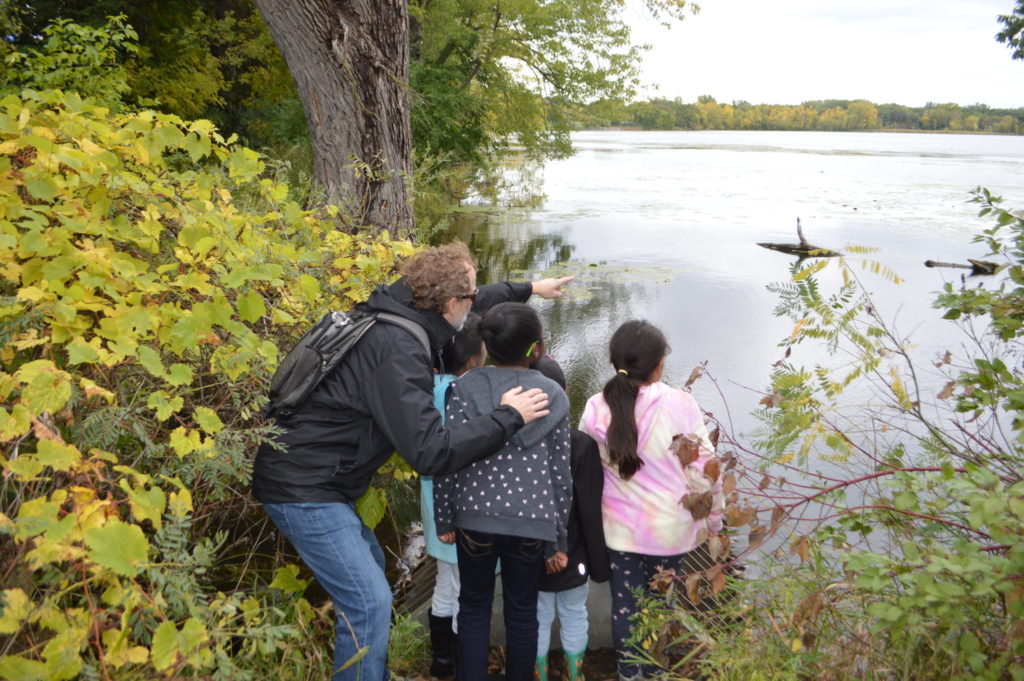 Above; Making observations at the outlet of Beaver Lake. 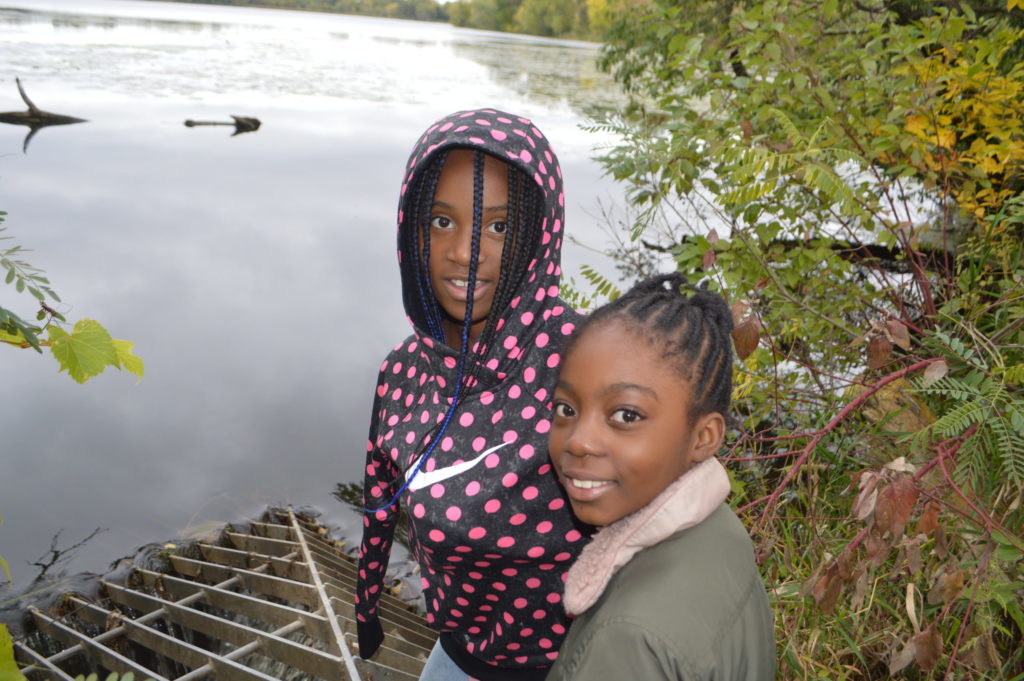 Above: Watching the water from Beaver Lake rush into the outlet that leads to the Beltline Interceptor and then to the Mississippi River.

Below: In the spring of 2019, Weaver Elementary fifth graders delivered 400 Adopt-A-Drain promotional door hangers in the Wakefield Lake neighborhood in Maplewood. 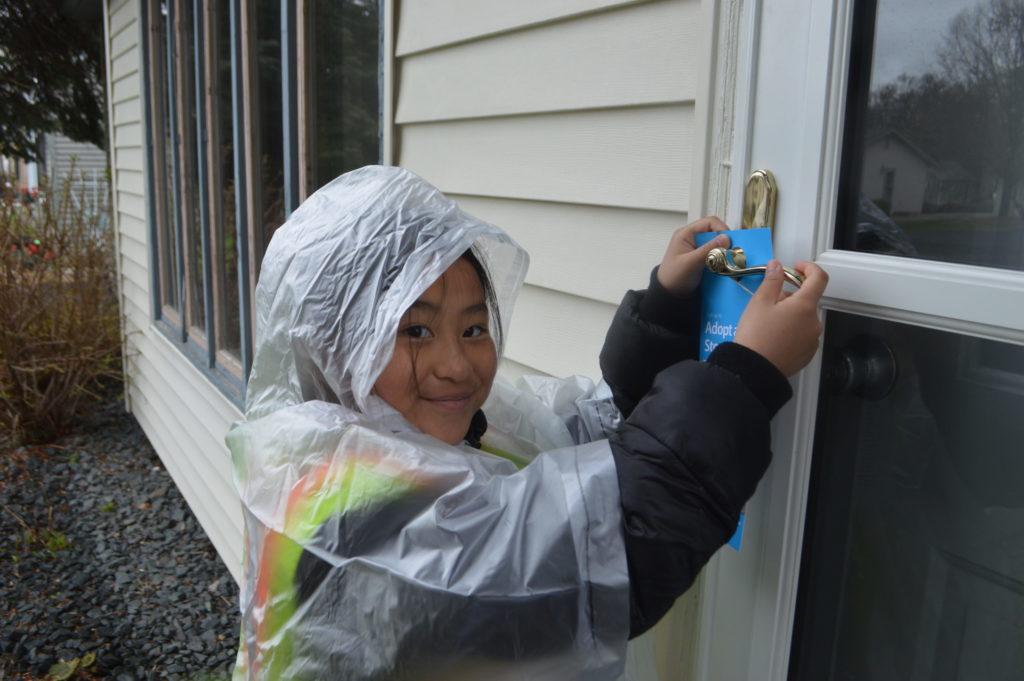 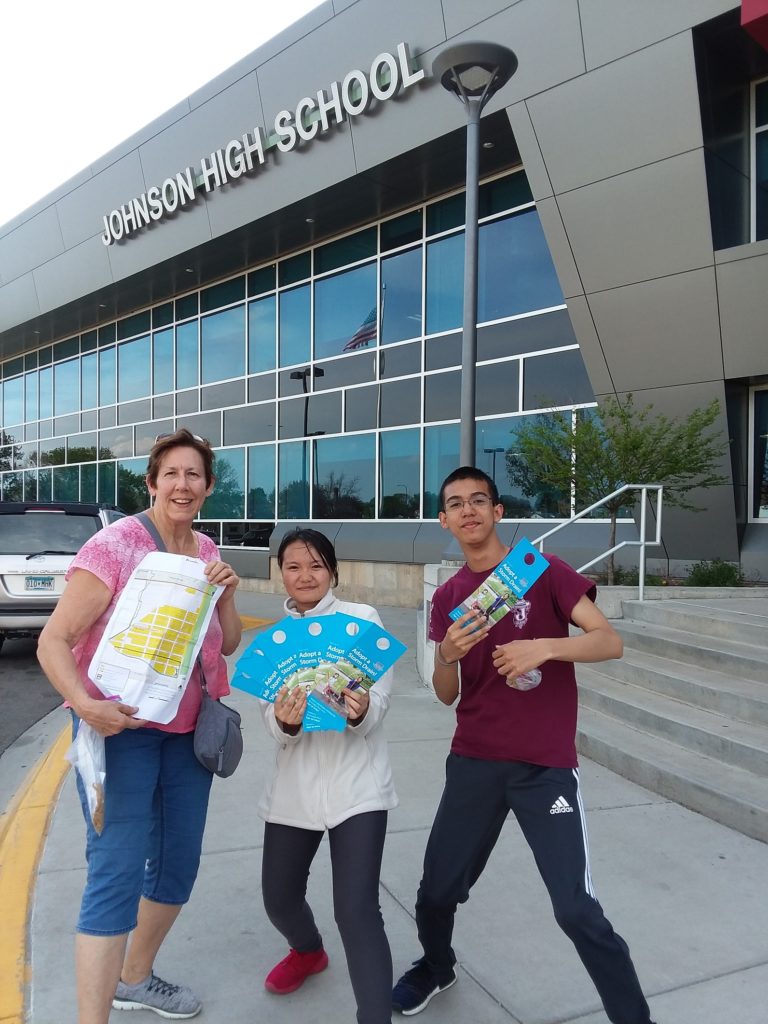 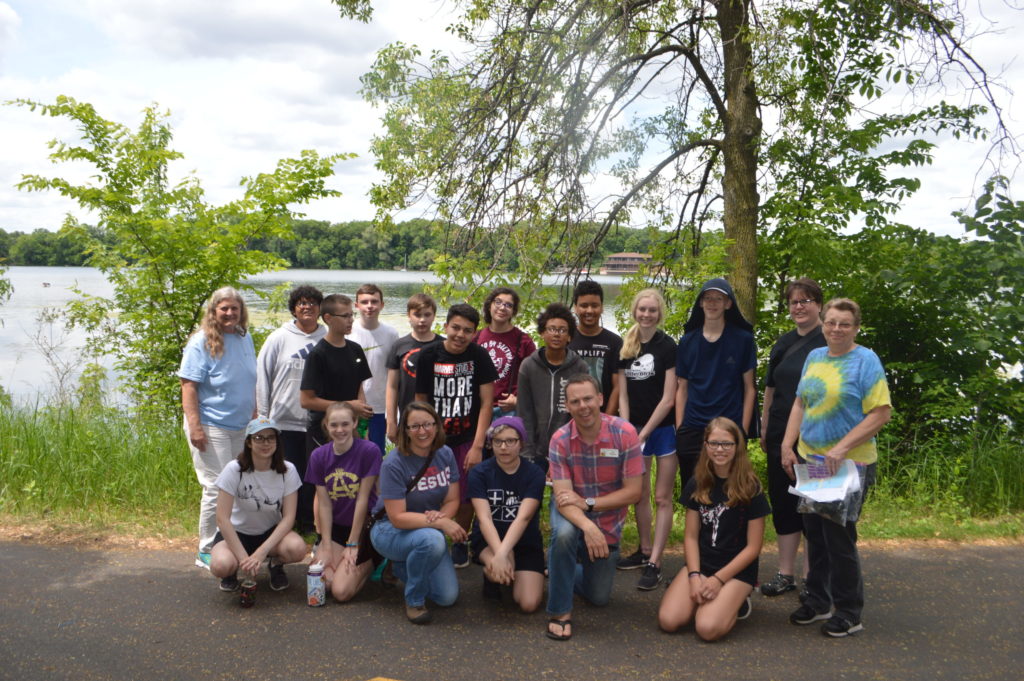 Below: An east St. Paul youth team from several churches distributed door hangers about the Adopt-A-Drain program on the east side of Lake Phalen with the assistance of pastors, Master Water Steward Betty Danielson and watershed staff. 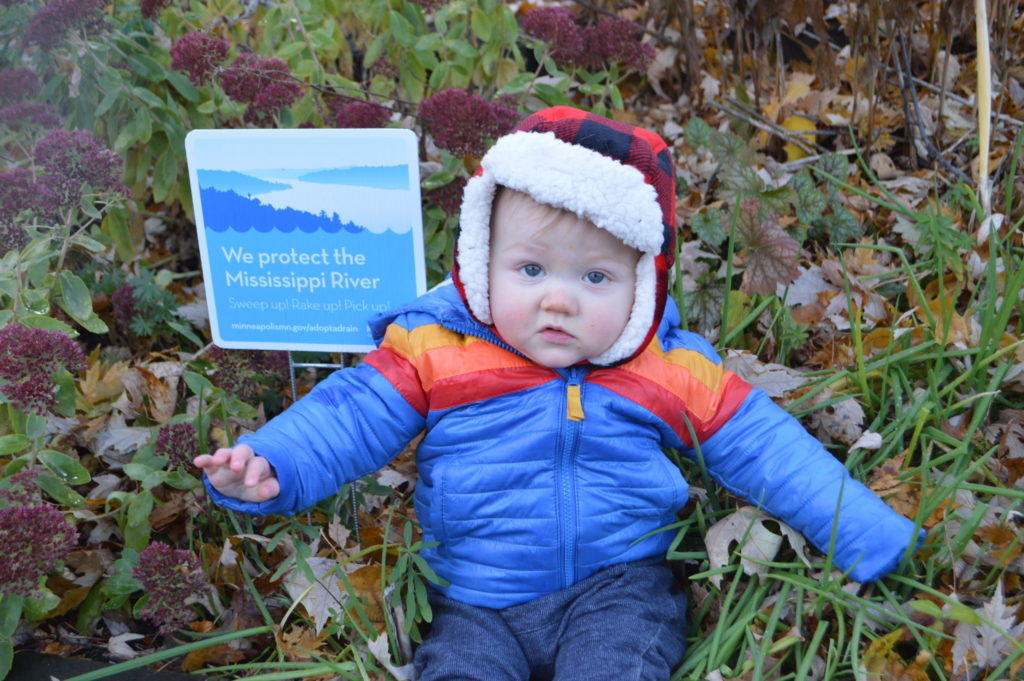 Help protect our water for all generations to come!

The Adopt-River has continued to grow on its own. At last count on April 26 2020, there were officially 371 households that have adopted 610 stormdrains throughout our watershed district. The Beltline and the Lake Phalen sub-watersheds hold the lead with 83 and 74 residents respectively who have adopted storm drains.

Here is a tally of the number of adoptions and locations to date:

This year, in an effort to increase visibility for the program,RWMWD will be ordering customized yard signs for residents who adopt storm drains in several other sub-watersheds where we are seeing an increase in the numbers of Adopt-A-Drain participants. These signs will indicate the nearest lake/ subwatershed to which the storm drains flow and transport stormwater. We are planning to engage in email/phone communication with adopters in those communities by thanking them for their participation and determining if they would like a sign. The City of St. Paul and our Hamline University partners will continue to deliver signs to Lake Phalen, Battle Creek and Beaver Lake adopters once the stay in place order is lifted. The city of Woodbury provided us with a stash of 15 Adopt A Drain signs for use in their community which we will begin delivering soon. Next stop for the signs: Carver Lake and Battle Creek Lake neighborhoods in Woodbury! 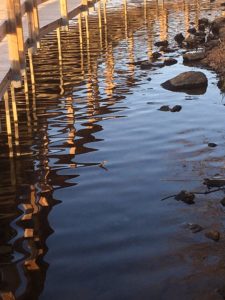 Clean Water starts at your curb! Last stops – The Mississippi River and the Gulf of Mexico! 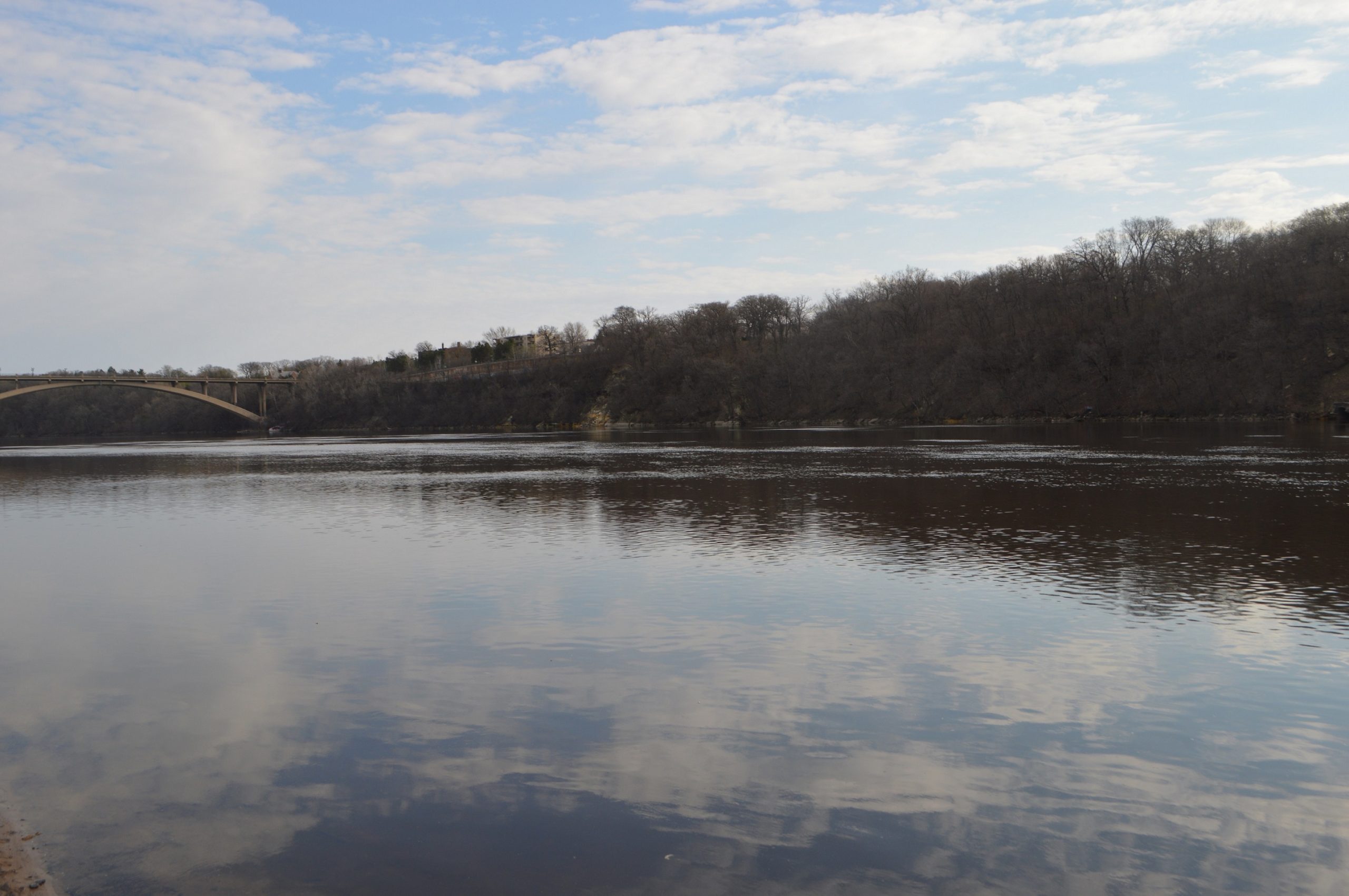