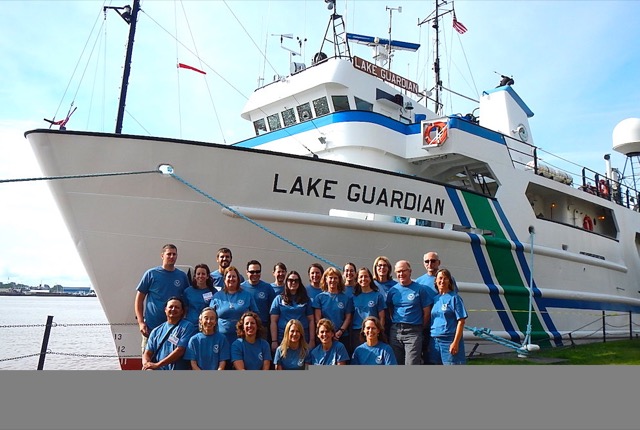 Last July I had the opportunity to travel aboard the EPA’s Lake Guardian with fourteen other educators as we teamed up with research scientists and the ship’s crew to collect data and study various aspects of the ecology of Lake Superior. Part One of my experience (Ripple Effect, August, 2016) focused on the research conducted on our journey (water quality parameters, zooplankton in the water column and diporeia in the sediment) and how we gathered data.

In Part Two I will focus on the ship itself and the experience of being aboard the ship (research facilities, living quarters, food, crew, pilot house, amenities, etc.). Come along for the tour!

The Lake Guardian is 180 feet long (the length of four school buses placed end-to-end) and sleeps 42 people in its hotel deck. Constructed in 1981 to serve as a supply vessel for offshore oil rigs in the Gulf of Mexico, the ship was purchased in 1990 by the EPA and converted into a research vessel.

The ship’s homeport is in Milwaukee, Wisconsin. When it returns to Milwaukee to refuel, the process can take an entire day as it can hold up to 79,000 gallons of fuel – that’s six-tanker trucks worth of fuel! The Lake Guardian has two engines, each with 1200 horsepower, and has a cruising speed of 10.8 knots. That is equivalent to 12.4 miles per hour on land.

The Lake Guardian is the EPA’s largest research and monitoring vessel, sailing between late March and early October among all five Great Lakes (Superior, Michigan, Huron, Erie and Ontario) and their connecting channels. Researchers from government agencies and universities use the ship’s facilities to collect and analyze samples of water, aquatic life, sediments and air. The US EPA Great Lakes National Program Office (GLNPO) manages the ship’s operations from their Chicago-based office.

The Lake Guardian has a permanent crew of up to fifteen people (the number of additional passengers varies by cruise, depending on how many EPA and visiting scientists are involved with a particular project). The crew and scientists work round-the-clock, adhering to a six-hours-on, twelve-hours-off schedule.

The Bridge is the top deck on the ship where the rescue boats, pilot house and rosette-operating booth are located. The Bridge also provides parking space for crew members’ bikes which are useful for getting out and exploring port cities during land side off-duty hours.

The Pilot House is where the captain and mates operate the ship’s navigational equipment.

The Aft Deck is the platform at the back of the ship from which various scientific tools are deployed. Life vests, hard hats and steel toed boots must be worn by anyone on the Aft Deck. There are several winches, including a large hydraulic “A-frame” winch, located at the stern. This winch has a maximum capacity of 30,000 pounds. This is the equipment from which the benthic sled, multi-corer, bow corer, etc. are deployed.

A smaller winch is used to deploy the PONAR and the zooplankton nets from the starboard side of the aft deck. If the captain needs to use the engine during a sampling session, he is careful to only employ the engine on the opposite side of the ship from where the sampling is taking place to reduce effects on the samples collected.

The Rosette Operating Deck is the working deck where the Rosette is stored and from which it is deployed.


Depths of interest for collections tend to be the surface waters (the epilimnion), the frigid depths (the hypolimnion) and the transition between the two called the thermocline (as well as where the transitions occur between these three layers). The thermocline shifts within each lake at various times during the year. These shifts are of particular interest to scientists.

The Wet Lab contains an array of safety and laboratory equipment including life preservers, hard hats, steel toe boots and rain pants, as well as computers, work benches, a fume hood and a sink and eye wash. As educators, we spent much of our time in the Wet Lab working on reports, participating in lessons and listening to presentations by professors from local universities who came aboard the ship while we were in port.

The ship’s passengers are divided among the sixteen cabins on board that come furnished with a bunk bed, desk, locker space and access to either a private or shared bathroom. Round-the-clock work schedules make it important to keep noise to a minimum at all times while on the hotel deck to respect individuals who may be sleeping when off-duty.

I shared a cabin with two other women, and our cabin connected to another three-person cabin through a shared bathroom in between. Bunks were surprisingly comfortable and the purring of the engine provided great white noise for lulling us to sleep, although not everyone appreciated this.

A full-time galley staff prepares meals each day. There are many delicious and healthy choices offered at every meal.

The Workout Room is accessible from the main deck, a place to unwind and get some exercise! Some crew members use their musical equipment here too.

A place for crew and scientists to relax when off-duty, furnished with a table and chairs, couches, a stereo, satellite TV and DVD player. Don’t tell anyone, but there are also lots of treats and chocolates in the cupboards.

Spending a week aboard the Lake Guardian was an unforgettable experience. We pulled sediment from over 300 meters down in one of the deepest sites in Lake Superior, we hypothesized how much our Styrofoam cups would shrink when submerged at depth with the Rosette, we survived a storm, our eyes got a workout counting zooplankton and most of the time we remembered to be quiet on the hotel deck.


The research was fascinating, the food was delicious, the crew, scientists and educators were wonderful and Lake Superior was beautiful. Kudos to the Center for Great Lake Literacy and their partners for creating such an outstanding program! 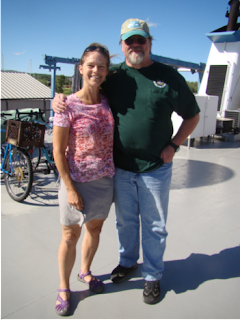 Captain John is a seasoned and capable pilot, as well as a very likable and amiable guy.